Livestock and Central Himalayan Langur Interactions in the High-Altitude Meadows of the Garhwal Himalayas, Uttarakhand, India

This project is focused on an interdisciplinary research approach to develop a conflict-mitigation framework to facilitate long-term human–wildlife coexistence. Human population and aspirational growth is leading to forest degradation and fragmentation and this is the prime cause of wildlife habitat loss, the global decline of biodiversity, and increase in human-wildlife conflict globally. A close examination of the anthropological, evolutionary, behavioural, and ecological aspects of conflict is crucial to develop mitigation schemes to benefit both humans and wildlife. We propose to establish an innovative, multidisciplinary, conflict-mitigation framework at a long-term primate research site, inhabited by Himalayan langurs Semnopithecus schistaceus; this coexistence framework can be expanded and applied to other primate species in particular, but also to other wildlife, in general. 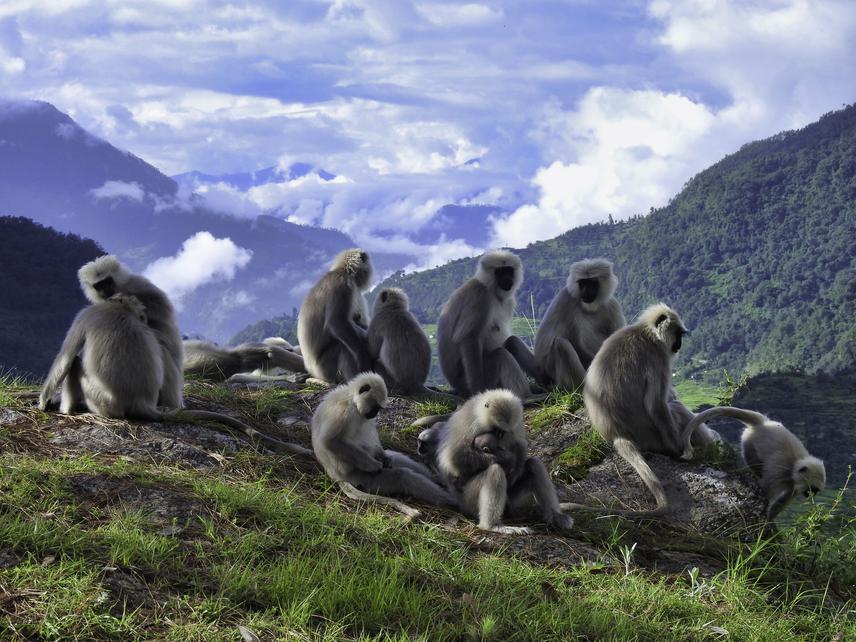 Our previous research in the study area, the Mandal Valley, indicates that villagers, who owned relatively more agricultural land and had good productivity, indulged in relatively fewer interactions with langurs, due to their low dependency on natural resources. In contrast, farmers with relatively less land and low agricultural productivity depended significantly on livestock for

extra income and thus relied more on the neighbouring forests for grazing their cattle and collecting fodder. This human pressure on the surrounding forests is likely to be a driver for the langurs to forage more on crops in these areas, at times of the year when natural food availability in the forest is low. Moreover, our previous research on the feeding ecology of the langurs suggests that the planting of langur food trees will possibly reduce crop foraging by the langurs. Thus, our aim is to investigate: 1- relationship between livelihood improvement activities and local communities’ behavioural tolerance towards langurs; 2- efficiency of wildlife educational programmes in relation to human behaviour and attitudes change toward wildlife; 3- Impact of habitat restoration and plantation on overall fitness of langurs. We believe this project will pave the way to better understand the science behind building ecological resilience of local communities towards anthropogenic changes, plaguing human communities and wildlife globally.