Livestock and Central Himalayan Langur Interactions in the High-Altitude Meadows of the Garhwal Himalayas, Uttarakhand, India

This project aims to obtain baseline data of the ecology and behaviour of the species in different altitudinal zones (1800 – 4500 m) and evaluate the conservation threats faced by its populations due to crop raiding in these regions. 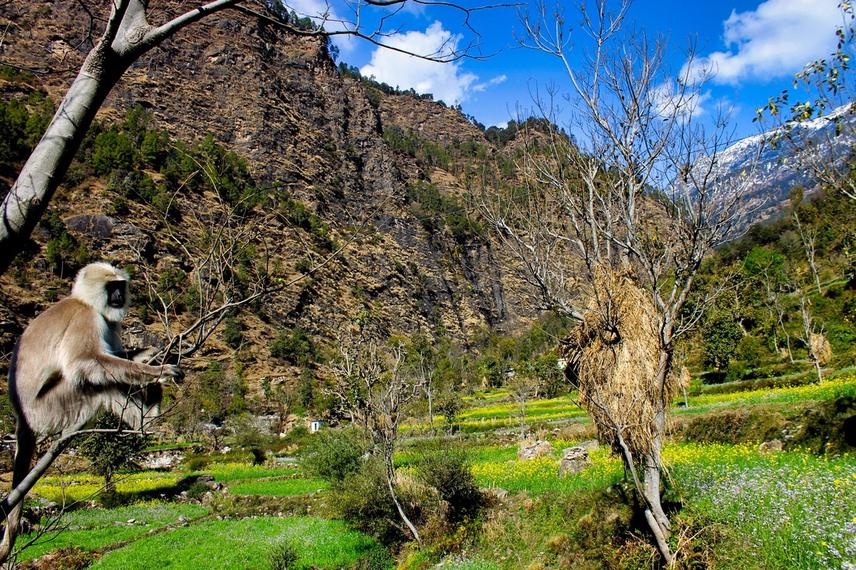 The temperate and alpine regions of the Himalayas exhibit a rich biodiversity, with much of its flora and fauna being undocumented though threatened. The central Himalayan langur, Semnopithecus entellus schistaceus, ecologically adapted to the higher altitudes of the Himalayas, remains virtually unstudied over much of its range and yet appears to be threatened due to conflict with local communities. This project aims to obtain baseline data of the ecology and behaviour of the species in different altitudinal zones (1800 – 4500 m) and evaluate the conservation threats faced by its populations due to crop raiding in these regions.

Although there exists great confusion regarding the taxonomic status of south Asian, including Himalayan, langur species, only few studies describe the ecology of a single Himalayan taxon, apparently Semnopithecus entellus ajax. The central Himalayan langur, S. e. s, thus, remains virtually unknown. The Himalayan region being one of the world’s hotspots, most sensitive to climate change, alpine species are likely to be highly vulnerable to global warming. Being a native of the Garhwal Himalayas, I have always seen S. e. schistaceus to be in conflict with the local communities over its raiding of agricultural and horticultural crops, which I documented in my preliminary study. Hereby, this project will document a detailed study on the ecology and behaviour of the langur at various altitudes focusing on its interactions with the local people and its conservation status.

This study will be conducted in the Kedarnath Wildlife Sanctuary– the largest protected area (975 sq km) in the Himalayas in Uttarakhand state, India. The objectives of this study are to:

(i) assess the habitat utilisation, foraging patterns and time-activity budgets of the troops of the central Himalayan langur at three different altitudes.

(ii) evaluate the differences in feeding behaviour and activity patterns with change in altitude, habitat type and vegetation types

(iii) assess the human-nonhuman primate interface with an emphasis on estimating the nature and extent of crop raiding by the species and the circumstances under which agricultural and horticultural crops are lost.

This study of conflict in the environs of the Sanctuary is crucial to understand the habitat factors driving a troop to move out of its natural habitat into an anthropogenic one. This study will also provide insights into the possible strategies that may be required to promote the harmonious survival of both species in a difficult environment.