Lachesis sp. represents the largest group of vipers in the Americas, reaching over three meters in total length. Lachesis muta rhombeata is a subspecies endemic to Brazil and is threatened with extinction. Its home range is restricted to the Atlantic Forest fragments in the states of Ceara, Rio Grande do Norte, Paraíba, Sergipe, Pernambuco, Alagoas, Bahia, Espírito Santo, Minas Gerais, and Rio de Janeiro. The bushmaster is still a poorly studied species, and little is known about its ecology, biology, and distribution. However, it is an emblematic species for the communities. 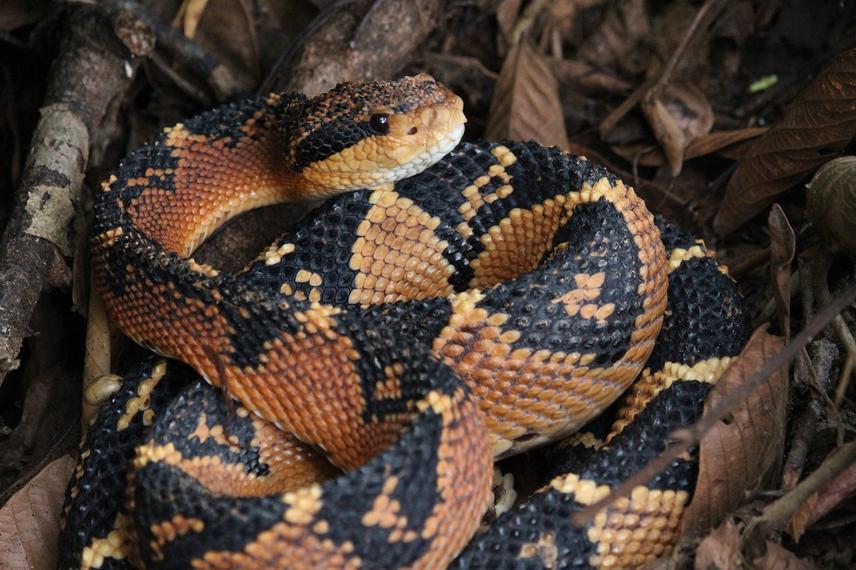 In the state of Ceara, the species exists only in one forest remnant, Baturite Massif. However, we believe that there are still totally unknown populations in the Atlantic Forest fragments of the state. Thus, this project aims to provide relevant information for the conservation of the bushmaster in forest fragments in northeastern Brazil. For this, we will build a potential distribution model for the species, considering the coordinates of occurrence of the subspecies provided in the bibliographies and what we have previously obtained, the environmental and social variables that influence the distribution of the species. Thus, to identify environmentally suitable areas for the possible unknown populations. We will select 5 areas within the state of Ceara, to carry out the searches, when finding an individual, we will take note of all the biological, ecological and behavioral aspects of the animal. The steps described above are intended to contribute to greater knowledge about the species in Northeastern Brazil, as well as for local and national conservation of the species and the environments it inhabits.

Furthermore, we intend to understand the relationship of the community with the local herpetofauna, and thus raise issues to be addressed in lectures / trainings with the communities. To perpetuate the information about the species and the local herpetofauna, we will distribute posters and mini-guides with information about the species, care, prevention and assistance in ophidian accidents. We aim to act strongly in raising awareness among people and local communities about the importance of wild snakes to the environment. Using educational and practical approaches to contribute to the preservation of the environment through people and the mitigation of human-snake conflicts.