Sea Turtles in Argentina: Interaction Between Fisheries and Good Handling Practices on Board

Fishery bycatch of non-target species is considered the greatest threat to the survival of sea turtles worldwide. The feeding and development area of three species of sea turtles: loggerhead (Caretta caretta), green (Chelonia mydas) and leatherback (Dermochelys coriacea) overlaps with an intense ﬁshing eﬀort, thus generating possible bycatch sensitive areas. Given the imminent critical state of sea turtle populations, in addition to the socio-economic importance of ﬁshing activity, this project will provide relevant information on the impact of ﬁsheries on sea turtle aggregations in Argentina, creating baseline information for ﬁsheries’ management and the introduction of mitigation measures for the future. 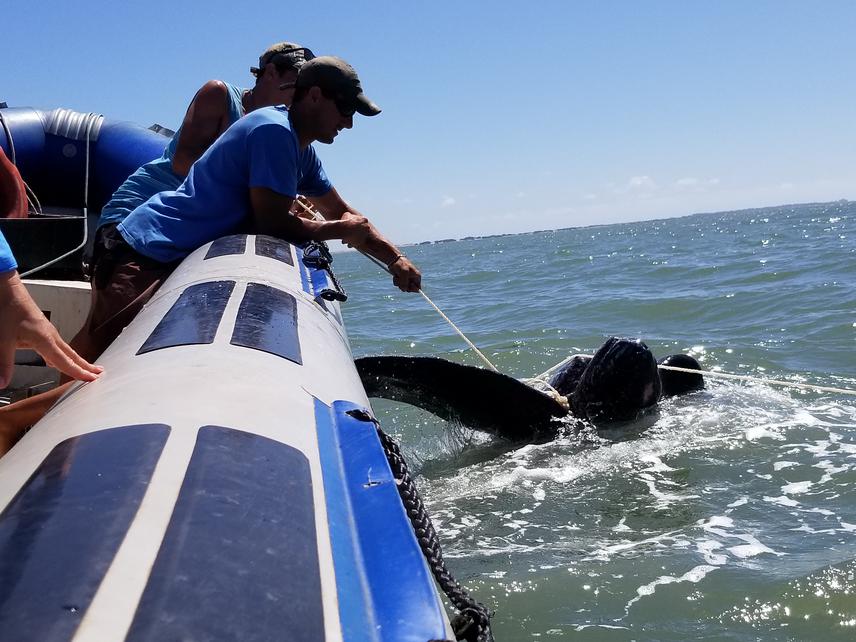 Satellite monitoring studies have revealed that these three species use areas that overlap with important ﬁshing grounds, such as the Río de la Plata Maritime Front and “El Rincón” area, where artisanal and commercial ﬂeets operate. High-susceptibility areas for sea turtle bycatch by the commercial trawler ﬂeet have been identiﬁed, and even the seasonality in which they could occur with more frequency. Although there are reports of caught sea turtles in diﬀerent ﬁshing arts, there is not an exact quantiﬁcation of it and its associated mortality.

The goals of this project are to identify and quantify bycatch and its associated mortality; to create maps with delimitation of high sea turtle bycatch areas; and encourage sea turtle good handling practices on-board along with the participation of stakeholders. This will be achieved through interviews with local fishers and monitoring daily fishing activity; educational workshops will be held for fishers interested in cooperating, where the biology and conservation of sea turtles will be presented, and a protocol for on-board turtle handling practices will be designed with the fishers that can be easily applied on their vessels. Awareness campaigns will be carried out at each sampling site using educational material and the protocol agreed with the sector.

This may be used in the future to develop mitigation measures according to the magnitude of the problem and it will allow conservation eﬀorts to be focused on areas considered a priority for sea turtle aggregations in Argentina. Additionally, the workshops will be the first step to consolidate the participation of the fishing sector in sea turtle conservation and in managing activities. The results of the proposed activities will serve to advance in the objectives of the National Action Plan for the Conservation of Sea Turtles, to reduce the interaction of sea turtles with ﬁsheries in Argentina.