Protecting a Unique Group of Chimpanzees and its Habitat in Ise Forest Conservation Area, Southwest of Nigeria

The establishment of the Ise Forest Conservation Area (IFCA) is the result of about seven years of research, monitoring and conservation-advocacy efforts to protect its fragile chimpanzee population and habitat. The Nigerian-Cameroon chimpanzee is classified as Endangered but populations in southwestern Nigeria are edging towards extinction mostly due to habitat loss from uncontrolled/excessive levels of farming, logging and hunting for their body-parts used in traditional medicine. Our ongoing conservation intervention is an effort to build on our previous efforts and to have increasing positive impact on species conservation. Specifically, this project will continue to ensure active protection and effective management of the IFCA while also enhancing local livelihoods and wellbeing. At the same time, there will be improved public awareness, monitoring and data on the species as well as improved strategies to ensure habitat connectivity within and around the new conservation area. 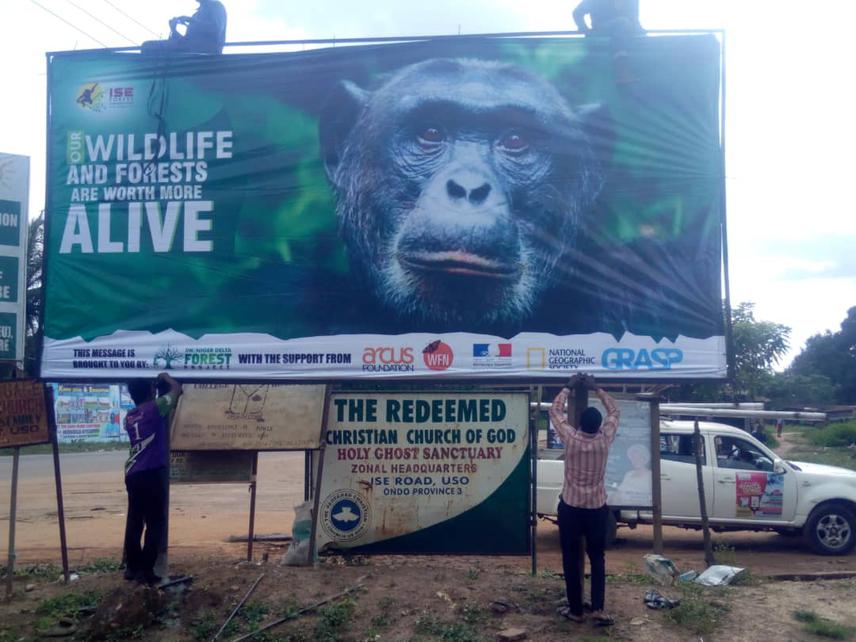 Putting up billboards for public awareness

Our work in Ise forest reserve dates back to 2012 following recommendations and priority actions highlighted in the IUCN Regional Action Plan for the conservation of the Nigerian-Cameroon chimpanzee (Morgan et al. 2011). We have since been dedicated to conducting research and monitoring chimpanzee population in order to both increase our knowledge of the (sub)species and maintain on-ground presence in the project area while trying to secure actual protection for this great ape and its habitat in Ise (and also in Idanre forest cluster, Ondo State) both of which were considered priority sites for chimpanzee conservation in the action plan. These research/

monitoring efforts led to a successful genetic study which revealed that although these chimpanzees share some level of ancestry with the Nigeria-Cameroon subspecies (Pan troglodytes ellioti), they are actually a distinct group (Hvilsom et al. 2018), buttressing the importance of preserving viable populations of this great ape. However, their habitat continues to disappear at an alarming rate due largely to unregulated farming, logging and hunting. In March 2020, the Ekiti State government approved the creation of a conservation area within Ise forest reserve. Generally, forest reserves in southwestern Nigeria are poorly managed and any form of its administration exist on paper only, whereas, State governments lack adequate funding, expertise and political will to ensure even minimum conservation, hence, creating a conservation area within the forest reserve was first and foremost recommended.

Amongst other things, our efforts so far has included: (1) management of the new conservation area within the reserve where logging, farming and hunting can be restricted and wildlife protection enforced; (2) advocating and engaging the state legislatures for the development of enhanced state policies and revision of existing forest and wildlife preservation law which have become rather outdated alongside other conservation interventions.