This project is a continuation of our 1st RSG project, which enabled us to reduce the number and the damage caused by free roaming and feral dogs inside the Volcanoes National Park (VNP) which is home to charismatic endangered Mountain gorillas and Golden monkeys as well as other species of conservation importance. However, the findings from our first project indicated that feral dogs living inside the park were actually not the major source of danger to wildlife, but rather a population of free-roaming dogs that regularly access the park from the adjacent communities in which they return after the hunt is over. The results from our survey indicated that domestic dogs in this area are free to roam around and respondents confirmed interactions between their dogs with other feral and free roaming dogs as well as wildlife animals in and around the park. In addition to that, the majority reported that, their dogs are reproducing uncontrollably, and unwanted puppies are abandoned, hence this population serves as a constant supply of the feral dog population inside the VNP. This increase in dog population continues to pose threats to the wildlife population in this ecosystem. Therefore, we aimed to redirect our interventions and tackle the problem from its source while at the same time engaging the local community. 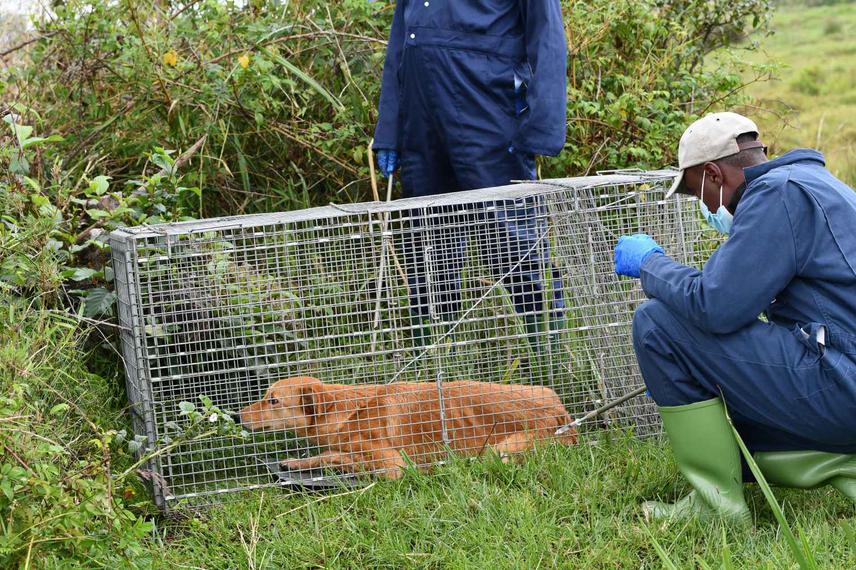 Anesthetizing a trapped free roaming dog for a safe removal from the park. © Joseph

2. Improved responsible dog ownership through robust educational program about animal welfare and the legal implications surrounding recklessness and mistreatments that dogs face due to their owners.

3. Increased awareness about the disease burden especially the bidirectional transmission of deadly diseases between wildlife and dogs. This will be performed hand in hand with other health interventions especially vaccinating dogs against rabies and deworming dogs for parasites that pose threats to wildlife.

4. Increased community awareness about responsible dog ownership at the same time increased collaboration between stakeholders in tackling this dog problem.