Filling-in Knowledge Gaps of the Endangered Preuss’s Guenon, (Allochrocebus preussi), in Cameroon Proposed Ebo National Park in a Bid to Enhance its Conservation

The Preuss’s Guenon (Allochrocebus preussi) is one of Africa’s most endangered primate species due to increasing anthropogenic pressure including forest degradation and hunting (Ndeloh et al., 2019). This species has a restricted distribution from western Cameroon to eastern Nigeria, and the Bioko Island, Equatorial Guinea. Very little is known of the population status of the species on the mainland. On Bioko Island, the species has undergone population declines exceeding 65% between 1986 and 2016 (Cronin et al., 2019). Hunting is most severe outside protected areas and this species is disproportionately targeted given its large size compared to other Cercopithecine monkeys and its semi-terrestrial behaviour which makes it vulnerable to hunters. The Ebo forest harbours 11 diurnal primate species including chimpanzees and gorillas but has no legal protection status. Primate research and monitoring efforts in the forest have been consistent within the past two decades but mainly focused on the behavioural ecology of the Nigeria-Cameroon chimpanzee (Pan troglodytes ellioti) and gorilla (Gorilla gorilla) (Dowsett-Lemaire & Dowsett, 2001; Morgan et al. 2003, Morgan & Abwe, 2006; Abwe et al., 2020). Fewer studies have been devoted to smaller monkeys including drills (Morgan et al., 2013), Preuss’s red colobus (Bowers-Sword, 2020). Despite its classification as Endangered on the IUCN red data list and Class A in the Cameroon 1994 Wildlife Law, very little is known about the ecology and population status of Preuss’s Guenon in Cameroon which may be the species last stronghold, and in the Ebo forest, the stronghold of many other endangered and critically endangered primate species. 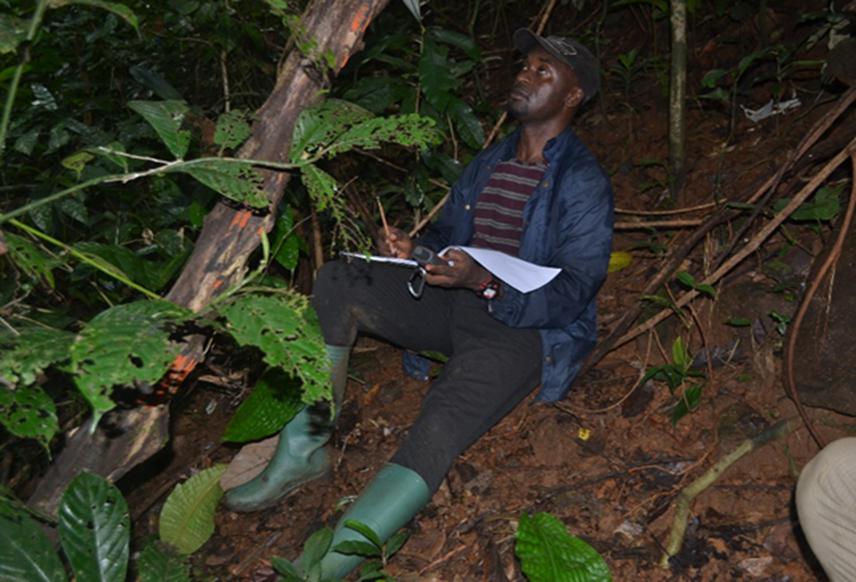 This project aims at contributing towards the conservation of Preuss’s Guenon; one of Africa most imperilled primate species in Cameroon proposed Ebo National Park in the Gulf of Guinea ecoregion. Specifically, (1) to elucidate the distribution and status of Preuss’s Guenon and other diurnal primate species in the Ebo forest, majority listed as Threatened by the IUCN Red List, including gorillas, chimpanzees, Preuss’s red colobus monkeys and drills, (2) to provide baseline data on the population size of Preuss’s Guenon in Ebo forest. (3) to determine the relative frequency of hunting and logging signs in the area. (4) to determine local perceptions to changes in prey (especially primates) distribution and abundance over time and the prospect of implementing conservation activities in the area. (5) to raise awareness for a change in the perception of local community towards Preuss’s Guenon conservation and other species.