Nyungwe National Park (NNP) hosts 13 primate species including the Eastern chimpanzees (Pan troglodytes schweinfurthii) which is classified as endangered on the IUCN Redlist. Chimpanzees are the top animals that attract tourists in NNP and this contribute significantly in boosting our economy through tourism which is the top sector to sustain the country’s economy. Despite their incomparable economic contribution in addition to their ecological role such as seed dispersion, chimpanzees are facing different threats including habitat loss and food scarcity due to different anthropogenic activities including illegal tree cutting where the root causes are the insufficient communities’ awareness and lack of alternatives. 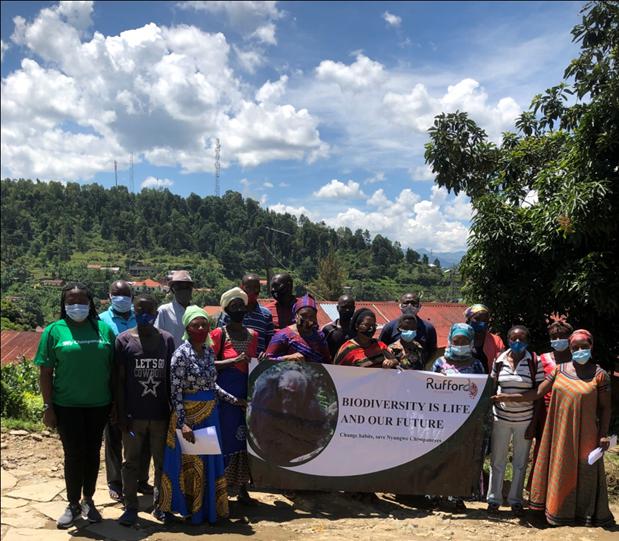 The idea of proposing this project entitled “ Promoting Conservation of the Eastern chimpanzees of Nyungwe National Park through creating Income Generating Activities (IGAs) to its surrounding Communities” came from the previous projects conducted in and around Nyungwe National Park precisely in the two sectors (Twumba and Mutuntu) adjacent to the park (Gisovu site).

One of these previous projects was focusing on “Promoting sustainable conservation of the Eastern chimpanzees through education and raising community awareness”. During this project, we asked our project beneficiaries whether they are still seeing persons going in the park and unfortunately, they confirmed that they see people threatening the park through cutting trees and poaching. After hearing from them, we asked them what they think can be the root cause of threatening the park and a large number of respondents told us that the problem is due to the lack of alternative means. They told us that many of communities living around Gisovu site depend on agriculture and their land is narrow and not productive enough and this push them to go in the park to harvest its resources for food, selling and earn some money. This is why we proposed this project to not only save the lives and habitat of this charismatic species through educating and raising communities awareness raising but also improve and sustain the livelihoods of these surrounding communities through selling different products (at different identified selling points) from different IGAs (knitting, sewing, weaving, beekeeping and mushroom farming) that will be created for them and earn financial income.

Our initial project beneficiaries will be communities belonging in first and second economic classes (Ubudehe categories) because due to the poverty, they can’t afford to buy firewood/ charcoal and get other family basic needs and this pushes them to go into the park and harvest its resources illegally for domestic needs of for selling purposes. This is why we thought about starting with these community groups but with aim of scaling up the project where after setting and equipping the project initial beneficiaries with theoretical and practical skills, each cooperative (either knitting, sewing, weaving, beekeeping or mushroom farming) will have a manager and other staff member and whoever who will be interested to join the cooperative will be most welcome without any criteria.