Continental Islands as Jaguar´s Refuges: Home-Ranges, Territories, Habitat Use, and Dispersion on the Amazon Coast

Due to the effects of insularization, the occurrence of large carnivores on small islands is unlikely. Jaguars (Panthera onca), the largest cats in the Americas, occur at unexpectedly high densities in the Estação Ecológica Maracá-Jipioca (ESEC-MJ), an Amazonian Island. The Amazon biome is important for jaguar conservation, as it includes approximately 70% of the species’ range, connects populations of other biomes, and has the largest area of adequate and non-fragmented habitat for the species. There are no systematic information on jaguar populations over Amazonian coastal habitats, with only two exceptions, the studies carried out by Vergara (2011) and Duarte et al (accepted in the Journal of Mammalogy). Therefore, our goals are to understand what factors determine the apparent successful permanence of large predators on coastal islands. Moreover, we will uncover whether the living island population is isolated or there is a flux between island and continent and how the dispersion of individuals occurs. In addition, we will produce fundamental information about population dynamics, such as: home-ranges, territories, activities, habitat use on the islands and how the tidal dynamics affect the activity and the possible dispersion of individuals to the continent. In this way, we can contribute to the socio-environmental management of the region in the form of helping to inform on how to live with large predators. 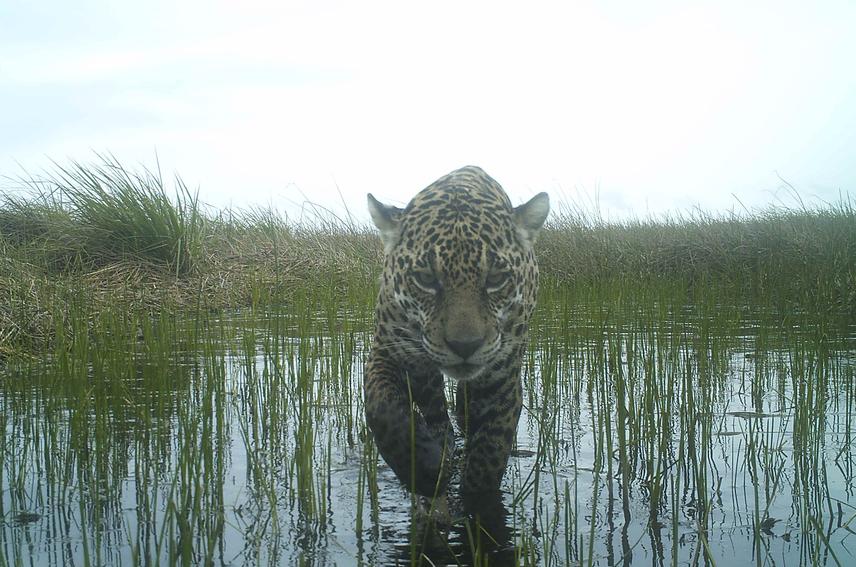 Frontal photo of the jaguar "Star" coming towards the camera trap, however in this one the right front leg is raised, a charm. © Herbert de Oliveira B. Duarte.

This study will allow the understanding of the role of different ecological factors to sustain a permanent population of jaguars in island systems. The high density of jaguars in the ESEC-MJ is probably due to a high availability of aquatic and semi-aquatic prey species as well as easiness of predation due to the concentration of these animals on aquatic habitats. Together with a high proportion of females and the presence of cubs, we suggest that the island provides high quality habitats for jaguars and is likely to support a dense population. These findings challenge the paradigm of large-mammal populations being unfeasible on small islands. Our study will also determine whether there is connectivity between populations in the island and continent. These set of information will increase the understanding on jaguar population ecology in the Amazon and will allow to identify the factors enabling the high densities of jaguars in flooding environments. In addition, it will also lead to a better understanding of alternatives for the conservation and human coexistence with large predators in these areas.