The main aim of this research is to contribute to understanding better the human and biophysical factors influencing the survival of chimpanzees in Kom-Wum Forest Reserve. The specific aims are to:

1. Identify the typology and causes of human-chimpanzee interactions in the reserve.

2. Produce the vegetation cover map of the forest reserve.

4. Investigate the determinants of nest-site selection by chimpanzees. 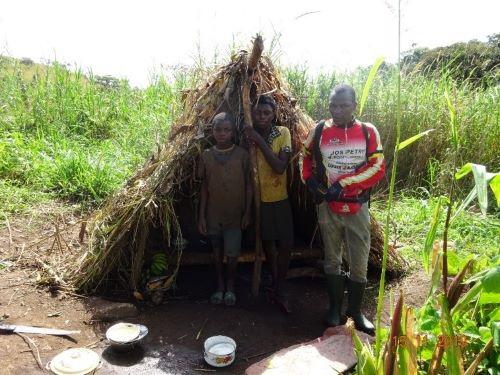 The Kom-Wum Forest Reserve (80km2) was created in 1951 in the North West Region of Cameroon (Sunderland & Mannaseh 2003). Since its creation, an increase in human population growth in the villages in and around the reserve has caused many local people to encroach into the reserve to exploit forest resources for their livelihood (Kah 2015). This illegal encroachment has led to fragmentation and loss of suitable habitat of the Nigeria-Cameroon Chimpanzee, Pan troglodytes ellioti (Morgan et al. 2011; Junker et al. 2012). As a result, the locals and non-human primates are increasingly interacting and coming into conflict with each other. The Nigeria Cameroon Chimpanzee is the most threatened and least studied of all chimpanzee subspecies with fewer than 6000 individuals remaining in the wild (Morgan et al. 2011). Its distribution is restricted between the area of South-East Nigeria and West Cameroon, north of the Sanaga River (Gonder et al. 1997). Since the recognition of the Nigeria-Cameroon Chimpanzee, very little is known about its life history parameters (Morgan et al. 2011). The IUCN endorsed a regional action plan which outlines measures and strategies to prevent further population decline of this subspecies.

In this plan, Kom-Wum Forest Reserve is described as a priority conservation site for the Nigeria-Cameroon Chimpanzee and recommendations were made to conduct surveys to confirm its abundance and ecology in this reserve. Only, recently have a few studies been conducted in Kom-Wum Forest Reserve to map the distribution and confirm the abundance of the chimpanzee as clearly stated in the Nigeria-Cameroon Chimpanzee Action Plan (Chuo et al. 2017, Doumbé 2013). We conducted further surveys in 2018 to estimated the population size of chimpanzees and to investigate their feeding ecology in this reserve.

However, we have insufficient knowledge on human-chimpanzee interaction in Kom-Wum Forest Reserve and the areas with suitable chimpanzee habitat have not been identified and mapped. Furthermore, the biophysical and human factors influencing the nest-site selection by chimpanzees in this reserve are not fully understood. Our aims in this current research, in this protected area, is, therefore, to: identify the typology and causes of human-chimpanzee interactions, produce the vegetation cover map, map suitable habitat of chimpanzees, evaluate which biophysical factors influence nest-site selection by chimpanzees and complete nest decay time assessment. Understanding the factors influencing chimpanzee occurrence is vital in prioritisation conservation actions and designing new plans to protect these chimpanzees and their habitats effectively.