This project will develop a pilot project in Riau province that engages pesantren in wildlife conservation. Our hope is to create participatory model of the pesantren involvement in other important conservation areas in Indonesia. 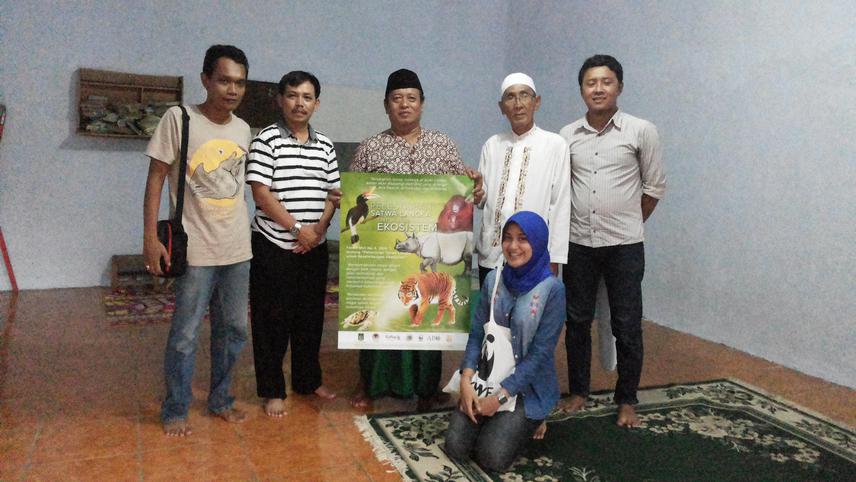 The Poster of Fatwa on Wildlife Protection (held by a clerics and village elder) disseminated in Ujung Kulon, West Java by WWF Indonesia Staff.

At the end of January 2014, Indonesia’s powerful Islamic council of scholars, the Majelis Ulama Indonesia (MUI), announced the first ever ‘biodiversity fatwa’ (edict). The fatwa highlights the core principles, beliefs and texts in Islam that relate to conservation and asks all Muslims to safeguard biodiversity, particularly threatened species like the tiger and rhino.

This edict represents an enormous shift in how Quranic teachings relate to the natural world: from now on there is no doubt that conservation principles are embedded within Islam. In Indonesia, one of the most important education institution that may carried out a long term influence to the education is the Islamic Boarding School (Pesantren). By involving the pesantren communities, we will be the change in conservation effort in Riau especially in Rimbang Baling as well as helping WWF Conservation Goals such as:

1. Increasing understanding of the connection between Islam and wildlife conservation amongst Muslim leaders, teachers and students of 30 pesantren around the Rimbang Baling reserve in Riau province, Sumatra.

2. Muslim leaders and educators empowered with the tools and training needed to spread awareness in protection of the tigers as well as will contribute over all the WWF goals, in zero poaching and double the number of wild wild tigers in Rimbang Baling Area.

Under this grant Centre for Islamic Studies (PPI) UNAS will organise the production of learning materials for clerics, teachers and students in pesantren on the topic of conservation and Islam, and will offer training to clerics and teachers in 30 pesantren near Rimbang Baling reserve in Riau (which is predominantly Muslim) using these materials to build their capacity to educate students. This will involve the following:

We will organize Two-day training for clerics and teachers associated with 30 pesantren located near the Rimbang Baling reserve in Riau province. The “training of trainers” will use the educational materials produced in this project to explain the guidelines of the biodiversity fatwa from both religious and scientific perspectives. The training will also support participants to develop and give sermons, lectures and advice to their students and communities on conservation and sustainable resource use principles and issues from the Islamic perspective.