The project aims to deliver tangible results when it comes to the proper long-term conservation of sharks, skates and rays in the eastern Adriatic Sea from combining the legal reinforcement and wider public education. Thus, the primary aim is to develop, propose and adopt the unique protection measures based on the law reinforcement for all threatened, migratory and rare species of sharks, skates and rays in Slovenia, Croatia, Bosnia and Herzegovina and Montenegro. Besides, the project aims to encourage citizen science and to develop easy-operated portal, containing original data on the diversity, distribution and basic biology, as well as multimedia and an ID key which will be completely to use for any non-commercial purposes (CC BY-SA). The project team will propose new local and regional status for three species currently considered as data deficient during the past regional assessment. Project results will help conserve and revitalise the (sub/meta) populations of elasmobranchs in the eastern Adriatic. 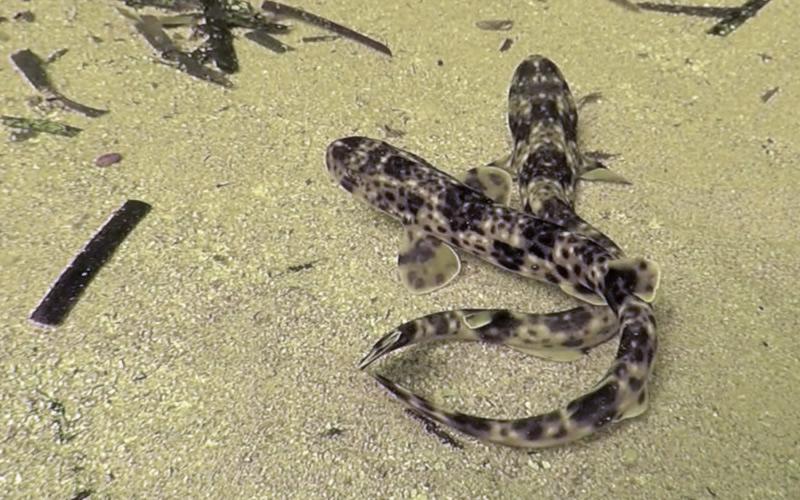 Juvenile specimens of the nursehound shark, Scyliorhinus stellaris (L.) resting at the shallow bottom © A. Gajić.

The project will focus on 30 regionally endangered species (of which 15 critically endangered, 8 endangered and 7 vulnerable) and three data deficient species of sharks, skates and rays which permanently or temporarily inhabit the waters of Slovenia, Croatia, Bosnia and Herzegovina and Montenegro (eastern Adriatic Sea).

Through previous two projects significant disagreement in legal acts protecting threatened sharks, skates and rays on regional scales has been observed. In such ways, certain critically endangered (or threatened) and migratory species are strictly protected in one country, but completely unprotected in neighbouring countries. Thus, this primary aim of the project is to ensure that all elasmobranchs proved to be threatened are proposed in the proper legal acts in four eastern Adriatic countries: Slovenia, Croatia, Bosnia and Herzegovina and Montenegro. Studies and long-term conservation plans are based on the scientific monograph “Sharks, skates and rays of the Eastern Adriatic Sea” published through the past RSG project and already widely accepted across the eastern Adriatic countries. Such comprehensive project will combine both extensive field studies across the eastern Adriatic and a precise laboratory analysis of by-catch samples. Through entire projects I will work closely with various stakeholders and governmental bodies. Besides, I will discuss my results and conservation plans through the European Environment Information and Observation Network - a partnership network of the European Environment Agency (EEA).

As one of the key project outputs, we will develop the portal (available in five languages) which will encourage citizen science and enable wider public masses to learn more about the biology, proper identification, threats, protection measures – and most importantly to add personal sightings of sharks, skates and rays. This unique tool in the Adriatic will be highly useful for the scientific community and suppose to significantly expand our knowledge of the occurrence and diversity of species. Likewise, full details on diversity and basic biology, accompanied by multimedia material gathered during this and previous studies will be available on our portal, and free to use for any non-commercial purposes. Same as previous two projects, it will be fully accompanied by numerous media, raising awareness campaigns, interactive workshops and lectures.