According to the IUCN latest updates on global amphibians (IUCN 2021), approximately 41 % of species of amphibian are threatened with extinction, that keep them at the top of most threatened vertebrate animal on Earth. In India, out of 446 species, 74 are threatened and 86 are Data Deficient. These figures leave amphibians under immense stress and calls for taking immediate conservation measures to save amphibians! The study site comes under human dominated Himalayan landscape of Nainital region in Uttarakhand (India) which has various habitats such as fast flowing hill streams, moist temperate forest, oakwood forests, paddy fields, ponds and lakes which provide variety of ecological niches and support a good diversity of amphibians. Sadly, this region is under tremendous anthropogenic pressure due to agrochemical pollution, checkdams constructions in streams, disposing solid waste into streams, urbanisation, invasive species and climate change. These factors will lead to the silent extirpation of many endemic amphibians in this region if no steps are taken on high priority to conserve amphibians and their habitats. 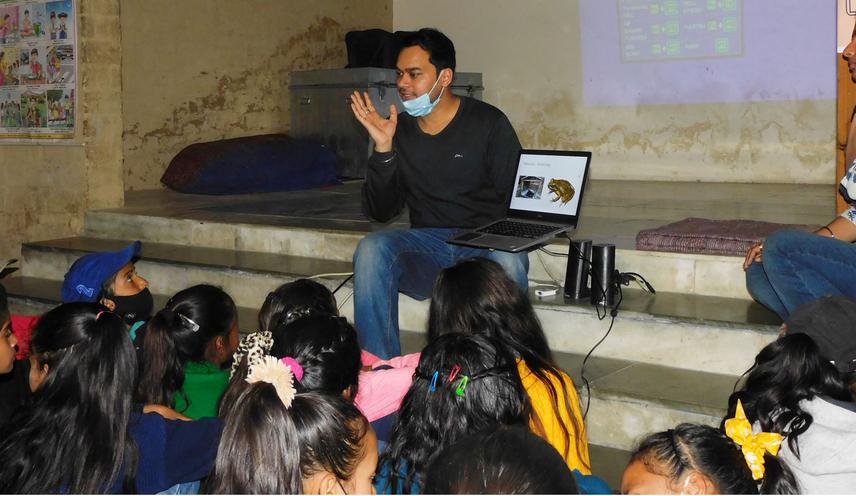 This region largely remains unexplored for its amphibian diversity. Sadly, generally being ignored as “small brown frog”, amphibians have been overlooked and as yet not considered for much protection in conservation management plans of local government. There are several endemic species which have not been reported from last several decades after their original descriptions. The reason is more likely to be a lack of surveys and systematic studies. Thus, I have designed this project to study amphibians of the region comprehensively, and by involving local communities in this pilot project to build capacity for amphibian conservation in the region.

• information on the status of amphibian’s distribution along elevational gradients, their diversity, threats and the impact of different landuse on the amphibians using

• modern techniques such as acoustic monitoring, DNA barcoding, ecological habitat niche modelling and through citizen science. We plan to develop a robust conservation action plan for the threatened and endemic amphibians in the study area of Nainital.