Ecology, Conservation and Interference of the Exotic Species to Callithrix aurita, one of the World's 25 Most Endangered Primates

This project aims to survey the occurrence of the primate species of the genus Callithrix in the Rio Doce State Park (PERD) in Brazil, characterize the main threats of the exotic species to Callithrix aurita, species listed as “Endangered” and has been categorized as one of the World's 25 Most Endangered Primates. The analysis of this project is of crucial importance for the build of a database that will support the decision making and implementation of threat management and mitigation actions for the conservation of C. aurita, and the park is one of the few occurrences sites of this species in Brazil. 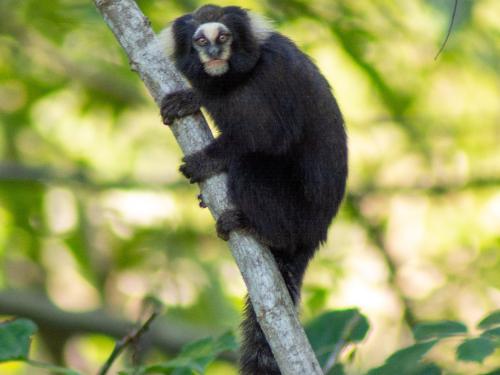 The Rio Doce State Park (PERD) is the first state Conservation Unit (UC) created, contains the largest remnant of Atlantic Forest in Minas Gerais (MG) – Brazil and it's one of the world's leading biodiversity hotspots. This park is local that suffered/suffers due to the industrial disaster involving iron ore tailings dam that caused one of the biggest environmental disasters in Brazil's history. The PERD contains several endangered species, among them, Callithrix aurita, considered one of the World's 25 Most Endangered Primates, 16% of the endemic species of the Atlantic Forest, and 30% of all mammal species of this biome. In addition, Rio Doce State Park is one of the three largest lakes systems in Brazil, along with the Pantanal Matogrossense and the Amazon system.

The presence of the exotic primate species (Callithrix geoffroyi and Callithrix penicillata) in the PERD is worrisome because they are a growing and severe threat to the remaining population of C. aurita, due to competition for resources and habitat, disease transmission, and hybridization. The park is one of the few occurrence sites of C. aurita in MG. This research project will contemplate the priority actions of the Action Plan for Conservation of Primates and the Maned Sloth in the Atlantic Forest (PAN PPMA) and of the PERD's management plan such as the identification and mapping of C. aurita population distribution and their conservation status, the occurrence of invasive marmosets and the impacts that these species have on the native species, callitrichid population census, as well as evaluation of genetic diversity to identify hybrid.

The data collected will be the base for urgent conservation decisions and the development of threat mitigation strategies from the invasion of C. geoffroyi and C. penicillata, seeking to reverse the population decline of C. aurita and to maintain the long-term establishment of viable populations. In addition, environmental education actions will be carried out in the park with park staff, visitors and population from neighbouring cities (local community), in order to prepare lectures, teamwork and games to raise awareness among those involved about the importance of conserving native fauna, and the dangers that wildlife trade and improper release of wild fauna can cause to nature. These actions will facilitate the knowledge exchange, allowing everyone to form a critical and conscious thinking, contributing new ideas and solutions that will help in sustainable development and mitigation of damage to the environment.