Dhole or Asiatic wild dog Cuon alpinus (Pallas, 1811) is one of the most remarkable elusive, pack hunting, social carnivores in the Asian terrestrial eco-regions. The existing population has been declining due to habitat destruction, decline of its prey populations, and disease transmission from domestic dogs (Kamler et al. 2015). However, unlike the tiger, it has received much less of the ‘charismatic’ attention (Selvan et al. 2013) and its role in Asia’s predator guild is poorly known beyond site specific studies. Despite their endangered status, there have been relatively few studies of their ecology and distribution (Venkataraman et al. 1995; Khatiwada et al. 2011). Dholes are considered a pest by people mainly due to concern for their own and family's safety and of livestock (Jenks et al. 2014). The record of retaliatory kill of dhole in Bardia National Park, Dhorpatan Hunting Reserve and Kanchanjunga Conservation area (Yadav et al., 2019; Aryal et al., 2015; Khatiwada et al., 2011) is evident that these incidents will escalate as more of these carnivores move to national park peripheries. 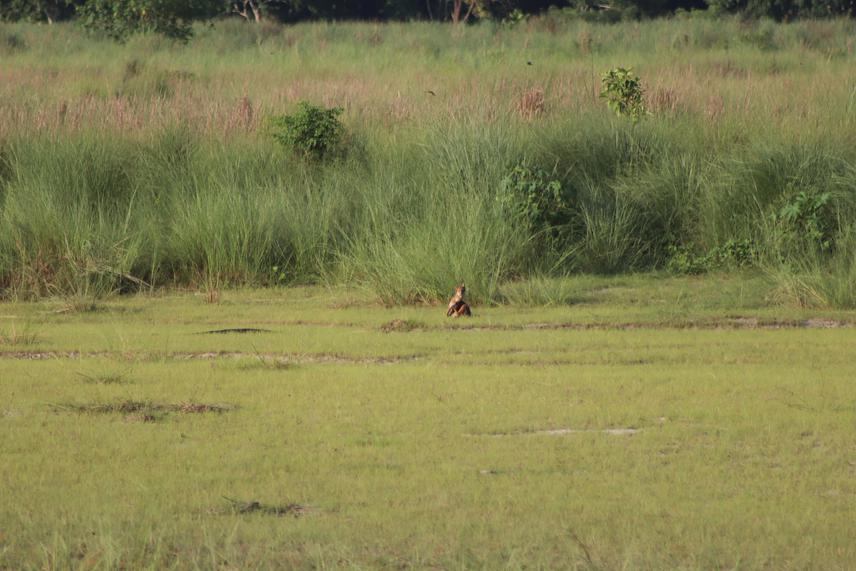 First sighting that inspired me to learn more about Dhole presence in CNP. ©Smritee Lama

Through community engaged scientific approach, the non-invasive camera trap survey coupled with transect walk will confirm the status, distribution, habitat, diet, and conservation threats in CNP. Key informant interviews will establish spatial-temporal pattern of conflict/interactions and community attitude towards Dhole and other wildlife around CNP. Combining the information of Dhole’s presence and adjacent communities around the buffer zones, the potential communities that will most likely be exposed to the conflicts would be identified. Subsequently workshops, orientation programs and conservation awareness school programs will be more focused on these identified hotspot sites.

The orientation to front line park staff and community conservation professionals (nature guide, forest guards, CBAPU, etc.) will also be more focused on these nearby Dhole distribution localities and conflict potential sites. The schools within these perimeters will also be identified and conservation awareness programs at school level will be conducted in these focused sites. The workshop will be organized with participation from local representatives, communities holding livestock, indigenous/marginalized communities, and other stakeholders. During workshops and orientations again discussion on knowledge of Dhole including identification, sightings, conflicts, and their attitude towards this species will be held. This science based and community centered holistic approach including communities, buffer zone committee, park authorities and other conservation stakeholders will contribute to build foundation of an effective conservation initiatives at protected area scale for Dhole.