Conservation of the Red-Handed Howler Monkey in Amapá, Brazil

Conservation of Red-Handed Howlers in Amapá: Geographic Range, Occurrence Sites and the Factors Affecting their Occurrence in Forest Patches

This project aims to develop an effective conservation strategy for red-handed howler monkeys in Amapá, north-eastern extreme of the Brazilian Amazon. More specifically, we aim to survey the species density and identify its drivers, to carry population viability analyses, identifying effects of hunting and genetic flux in population viability, to assess hunting levels and to raise awareness in hunters about the species’ situation, and to identify key sites for protecting viable populations of red-handed howler monkeys. 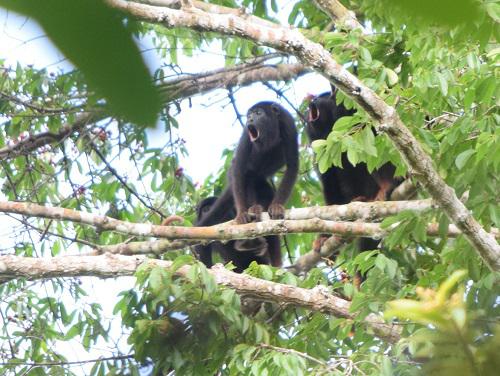 Our project aims to identify an effective strategy for the conservation of red-handed howler monkeys in Amapá. To achieve this goal, we will estimate the density of the species through passive acoustics in 15 forest patches and identify the environmental correlates of density. We will carry population viability analyses, assessing the minimum viable population, and the effects of hunting and genetic flux in the population viability. We will assess hunting levels through hunting calendars and raise awareness among local hunters about the importance of the species and its threats by talking directly with them. Therefore, we will be able to identify sites where howler monkey populations are viable and/or to manage the populations to promote their viability.

Management should include translocations of individuals, enhancing landscape connectivity, or promoting habitat changes that increase the species density. We will also try to create one or more protected areas, which would include viable populations of red-handed howler monkeys to assure the species conservation in Amapá.