Seed dispersal by animals is fundamental for the maintenance of tropical biodiversity. Atelinae primates are large-bodied arboreal frugivores, key dispersers in the Neotropics. They provide an important dispersal service as they ingest a large number of seeds from many species, including large-sized seeds (of high carbon storage capacity trees and economic importance) not ingested by other frugivores. The primates Ateles chamek and Lagothrix cana are species endangered due to hunting and habitat loss, which jeopardize their ecological role. We aim to quantify and detail the seed dispersal services - contribution to plant early recruitment and carbon storage potential - provided by both monkeys in a well-preserved area of Amazon rainforest. The project will also support a tourism plan for primate observation, which will be implemented by SouthWild. Local people will also contribute to the fieldwork. Doing so, we are encouraging green-related jobs while highlighting the importance of conserving large-bodied primates. 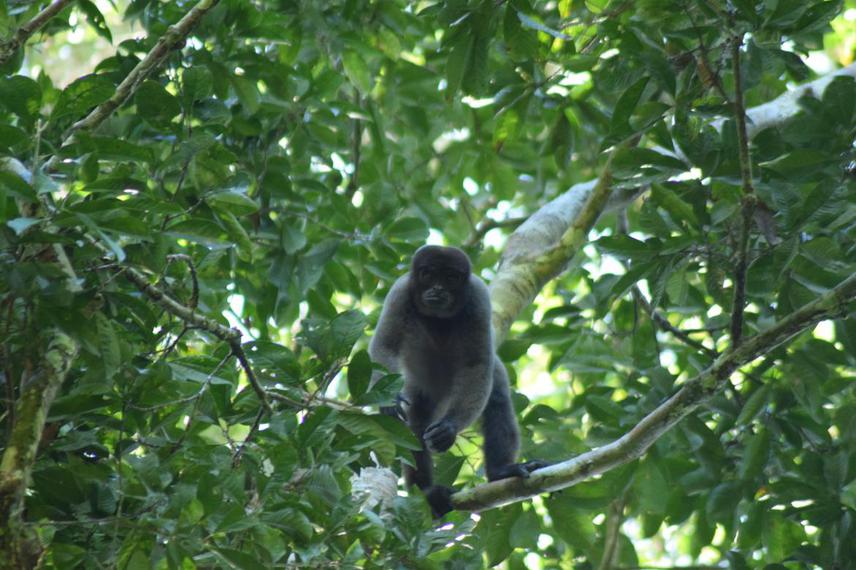 This study will be conducted at Fazenda São Nicolau at the Cotriguaçu municipality, Mato Grosso, Brazil. FSN is located in the Amazon forest, on the left bank of the Juruena River, a tributary of Tapajós. We aim to investigate how plant species of fleshy fruits occurring in different population densities are affected by frugivores, mainly the large-bodied primates black-faced black spider monkey (Ateles chamek) and Geoffroy's Woolly Monkey (Lagothrix cana). Both species are endangered due to hunting and deforestation.

Considering that fungi pathogens are an important source of plant mortality in early life stages in tropical forests (e.g. damping off and rotting of seedlings), we intend to understand the role played by frugivore mammals in reducing fungi infestation and, consequently, increasing germination and recruitment success of different Brazilian Amazon tree species in a continuous tropical forest. We will conduct field experiments simulating frugivore treatments (pulp removal, gut passage and removal from conspecifics) on seeds of different plant species. The results would provide insights on how plant species with different adult densities depend on primate treatments. The combination of field experiments aiming to test the effect of frugivore manipulation on seed germination and seedling recruitment in addition to the field data on seed dispersal quantity and deposition site by the two primate species should help to better understand the contribution of large-bodied primates for the dispersal effectiveness of plants with specific characteristics.

We will quantify and detail the seed dispersal services (contribution to plant early recruitment and carbon storage potential) provided by both monkeys in a well-preserved area of Amazon rainforest. The primates feeding behaviour data will be used by SouthWild to implement a primate observational tourism plan. We consider that the monetary approach of carbon market and the tourism infrastructure will gather attention from decision-makers as it contributes to promoting local economy.