Among its restricted distributional range in the Rhodes Island and Southwestern Anatolia, the Oriental (or Anatolian) Sweetgum (Liquidambar orientalis Mill.), a tree species in danger of becoming extinct, constitute forest only in some coastal districts of Muğla Province, southwestern Turkey. We aim to ensure forest sustainability by creating and replanting corridors between dispersed segments increasing the total amount of the forest to 2500 hectares. We also aim to do public awareness issues and wildlife researches in order to rotate stakeholders’ opinion against to the Oriental Sweetgum Tree. 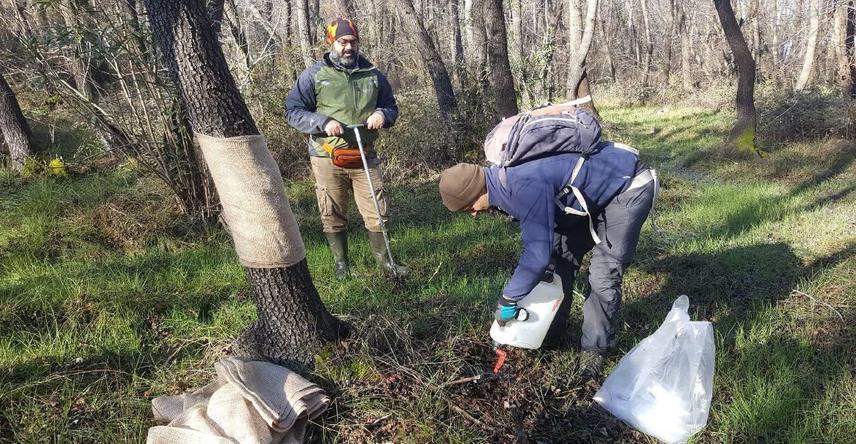 Arachnology team has started the surveys inside the sweetgum forests.

Oriental sweetgum tree (Liquidambar orientalis Mill.) is an endemic species for southwestern Anatolia and Rhodes Island. The species occurs healthy forests&coppices just around the coastal districts of Muğla Province, Turkey. Locals have benefited from this charismatic and holy species in many different ways for ages.

Although the area of the forest was 6.312 hectares in 1949, now it is only approximately between 1.500 and 2.000 hectares due to the changing urbanization and local agriculture policies paving the way for transformation of the living spaces by the locals and the emergence of the mass tourism, the forest are broken and now on the brink of extinction. The occupation area of Sweetgum forests declined sharply during the last decades, resulting also in increased forest fragmentation. This species has Endangered statue on IUCN Red List Categories, and EUFORGEN has listed to this species as protected tree and classified as critically endangered on the scale of European Continent. As a result, re-establishment of forests by corridors and re- unification of the fragmented groves play vital role for the future of this unique forests.

Contrary to those problems, the stakeholders from the decision makers and the locals have poor conservation motivations due to the lack of knowledge and road map.

We are planning to ensure the ecological integrity of the forest by identifying suitable corridors between dispersed forest fragments and by replanting these areas by sweetgum trees, making the fragmented forest the whole again.

NATURA’s main aim to creating proprietary in sweetgum forest conservation. As a result, a broader space will be attributed as a forest without overtaking new land. Therefore we aimed to preserve the integrity of the forest ecosystem and to prevent further economic losses in forestry sector. That’s why this afforestation project will be the first of its kind in Turkey because it takes into consideration landscape ecology. The land purchasing campaign also will be the pioneer for the other natural areas (steppes, forests, pastures, wetlands etc.) in Turkey. Nature reserves concept will be introduced to Turkey with this campaign.

On the other hand, we need to know that how fragmentation affects the wild life. That’s why, the wildlife researches will be the first kind for the sweetgum forests. The results will be used to raise our knowledge capacity to raise the conservation motivation of the stakeholders.

To sustain our conservation management in a long future we will create networks within the youths in the project region by organizing Sweetgum Forest Schools.