This community based conservation project’s principal goal is habitat-oriented conservation through the investigation of small-scale movement behaviour of juvenile Blacktip sharks in their nursery grounds using acoustic telemetry. Together with the Galapagos National Park Service, local and international volunteers and the involvement of local fishermen we will render the essential baseline information to support the creation of a new zoning scheme of the world reknown Galapagos Marine Reserve. 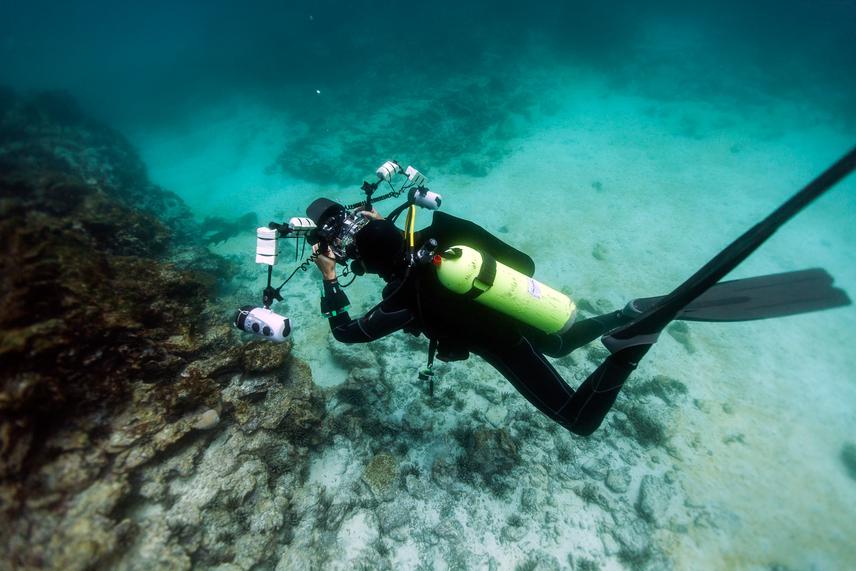 The success of our biotelemetry project builds upon two key elements imperative for nature conservation:

1. The use of state-of-the-art marine research techniques and

2. The involvement of the local community through direct participation and education.

Acoustic telemetry is used to continuously track juvenile Blacktip sharks (C. limbatus) at Puerto Grande, a small mangrove-fringed bay on the north-eastern coast of San Cristóbal Island which has been determined as the island’s most important shark nursery by the Galapagos National Park Service (GNPS). Nevertheless, this fragile habitat, which is used as a refuge by sharks within their first live stage, is currently open to the artisanal fishery. Local fishermen use gill nets to catch Mullets (Mullidae) in this bay as well as other shark nurseries causing a high by-catch and death rate of juveniles of several local shark species such as Scalloped Hammerheads, Tiger Sharks, Blacktip and Whitetip Reef sharks, cutting the source of the sharks’ reproductive populations. The investigation of juvenile shark movement behavior will build the foundation for an improved zoning scheme of the Galapagos Marine Reserve (GMR), which was recognized as provisional in the reserve’ s original management plan due to the lack of spatial information on the local biodiversity.

Currently, the zoning of the reserve is under revision and thus the funded project will not only fill gaps in the knowledge of the ecology of Blacktip sharks and but most importantly work hand in hand with the Galapagos National Park Service to render the spatial information that is desperately needed to aid the conservation management of sharks and their associated habitat in the GMR. By involving local volunteers and students of the Galápagos Academic Institute of Arts and Sciences (GAIAS) on San Cristóbal Island the project will help to build capacity among the local population, recruiting potential future conservationists and researchers.

Additionally, the investigation builds upon the help of local fishermen for logistics and direct participation in the research activity, therefore raising awareness amongst the community, while offering an alternative income through working in conservation. The publication of results in presentations for local and international students at GAIAS and through workshops for the local fisheries organized with the GNPS will help to convey the message about the importance for the protection of the sharks and their habitats and set the base for implementation of the new marine reserve design.