Looking for Lost Fish: Status of the Largetooth Sawfish (Pristis pristis) in Costa Rica and the Central American Region

Looking for Lost Fish: Status of the Largetooth Sawfish (Pristis Pristis) in Costa Rica and the Central American Region

This project will determine the current status of the Critically Endangered Largetooth Sawfish (Pristis pristis) in Costa Rica, and assess local threats affecting their long-term survival. 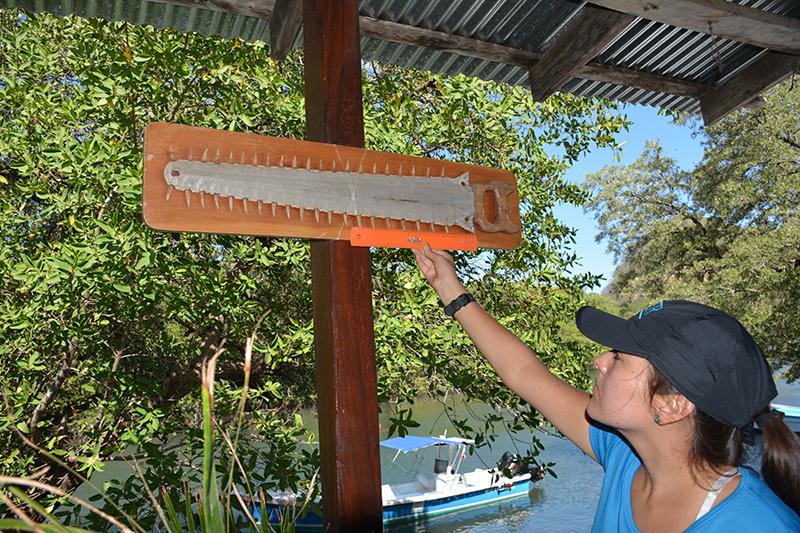 Sawfish (family Pristidae) are the most threatened group of elasmobranchs (sharks and rays), with all five species listed on the IUCN Red List as either Critically Endangered, or Endangered (Dulvy et al. 2014). Given their life-history traits (i.e., slow growth rates, late maturity, low fecundity, and long life-spans), inshore estuarine/riverine habits, and distinct morphology (large body with long saw-like rostrum), sawfishes are generally less resilient to low levels of fishing, coastal/riverine development and coastal pollution. Mangroves, for example, have been identified as a critical habitat for immature sawfish (Norton et al. 2012, Papastamatiou et al. 2015), but in many regions mangrove forests have been loss due to rapid coastal development. Moreover, due to their estuarine and freshwater affinity, changes in hydrological regimes resulting from land use activities in rivers (e.g., dams, impoundments and other types of alterations that can restrict fish migration) can severely threaten sawfish populations.

The Largetooth Sawfish (Pristis pristis) has a widespread global distribution across tropical waters. In Latin America, the Largetooth Sawfish was once commonly found from Mazatlán, Mexico to Peru (Cook et al. 2005, Faria 2007); however, recent findings indicate this species may have either suffered large reductions in abundance or may be locally extinct in some areas (Kyne et al. 2013). Given the extent of their distribution, the lack of consistent historical sightings, and the increase of human- induced threats to wild fish populations, regional-scale conservation efforts are crucial in this region. Over the past 10 years, there has been a number of sawfish sightings in Mexico, Belize, Honduras, Nicaragua and Costa Rica (Kyne et al. 2013; G.

Lara pers. comm), which suggest that the entire Central American region may still hold a viable population. The Térraba-Sierpe Wetland (south Pacific of Costa Rica), for example, is one of most productive and diverse wetland of Central America, a protected RAMSAR site, and also is presumably one of the few remaining areas where the Largetooth Sawfish can be found in Costa Rica. However, at the moment the construction of a new dam in the Térraba River could be threatening their long-term survival. Consequently, the need to determine the current status of the Critically Endangered Largetooth Sawfish in Costa Rica has encouraged new efforts to (i) estimate their distribution and abundance; (ii) assess local threats affecting population size and/or their potential for recovery; and (iii) define effective management and conservation strategies.