More severe and frequent fires are strongly affecting the structure and function of forest ecosystems worldwide. The causes of these novel fire regimes are attributed to global change: climate change (e.g., increased temperatures and prolonged droughts) and land use (e.g., livestock, introduction of invasive species), which act synergistically weakening resilience of the forests. In northwestern Patagonia forests of the endemic conifer Araucaria araucana (Pehuén), which is an endangered species is losing its resilience. Although A. araucana evolved under regimes characterized by low-severity and infrequent fires, short periods of time between current fires are not sufficient for its adequate growth and reproduction. Consequently, these forests are suffering fro high mortality rates of seed trees and difficulties to regenerate. 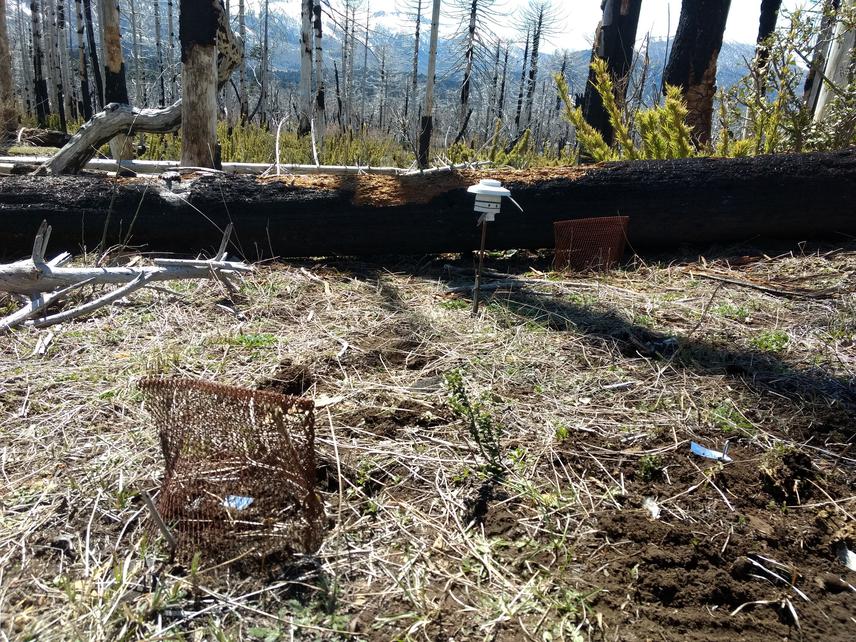 Planting plot around a fallen trunk (cages against granivorous rodents and humidity and air temperature sensor).

The forests of A. araucana represent the northern gateway to the Andean-Patagonian Forest ecosystems. This is a tree species that has been present since the Mesozoic Era, very long-lived and of great ecological, cultural and spiritual importance. These primeval forests provide food (through their large "piñon" seeds) and shelter for multiple animal species and are revered by the indigenous peoples who inhabit the region. In the Lanín National Park (study area proposed for this project), there are A. araucana forests that were affected by anthropogenic fires in the recent, which are slowly recovering and that must be protected from future fires. The objective of this project is to evaluate the influence of the mortality of seed trees and post-fire site conditions (e.g., air temperature, relative humidity) on the natural regeneration of A. araucana. To do this, we are going to survey post fire vegetation, and we are going to sow and plant propagules of A. araucana, which will serve, in addition to fulfill scientific purposes, as a small restoration effort. With this effort we intend to establish vulnerable areas for natural regeneration and define micro-sites suitable for regeneration, which serve to inform restoration and conservation plans for A. araucana forests.