Species are being extinct at rates as alarming as a thousand species per year due to human activities. Habitat loss and fragmentation – that is, the breakup of a continuous habitat into several smaller ones – are central processes induced by human activities (such as agriculture and hydroelectric stations) leading to the extinction of species. This extinction will undoubtedly lead to changes in the ecosystem and wildlife communities, even in highly diverse groups or habitats.

Arthropods account for at least 80% of all animal species on Earth and are essential to a wide array of ecosystem processes, such as nutrient cycling, dung removal and pollination. However, even this high diversity does not aid for extinction as arthropods are threatened by several human induced disturbances, especially habitat loss and fragmentation. 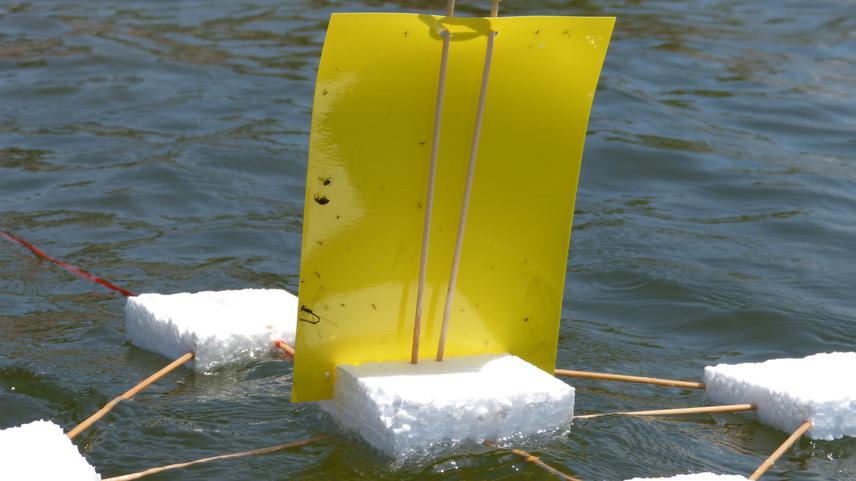 The structure of our floating sticky trap to capture arthropods in the open-water matrix. © Lucas Colares.

In this context, our goal in this project is to unravel how arthropods respond to habitat loss and fragmentation in Amazon. To do so, we are distributing ~4000 sticky traps across the landscape of the Balbina reservoir, which was created in 1989 due to the implement of a hydroelectric station, flooded a continuous forest area equivalent to twice the size of London and created around 3500 islands in the reservoir.

During this project, we will be implementing computer vision methods to automatically identify, count and measure the arthropods captured in the traps. This in an important advance for the biodiversity assessment of arthropods, which is often time-consuming due to the outstanding diversity. Our goal is to automate the process of identification to allow for a fast and low-cost assessment across the world of such an important biological group.

Beyond this, during this project, we will conduct educational initiatives with the people from the Balbina village, conducting supervised visits to the islands for conversations about the importance of natural biodiversity, the major threats to this biodiversity and how we can all act together to avoid biodiversity losses. Together with science outreach posts and videos across social media, these outreach initiatives will locally and globally communicate our findings.

This project is the largest experiment of fragmentation ever done with tropical arthropods in insular habitats, and we intent to bring relevant information for arthropod conservation and assessment while reaching to people about the importance of biodiversity and how to act together for its preservation.

Header: Dead trees punctuating the water matrix in the Balbina reservoir. When the reservoir was flooded, there were no initiatives of wildlife rescue or vegetation removal, resulting in the present landscape. © Lucas Colares.