The general objective of this research is to analyze the correlation between temperament with behavioral variables and species-habitat relationship of lesser anteater (Tamandua tetradactyla) in the coastal area of Parnaíba Delta / Maranhão State / Brazil.
Thus, I will access the temperament/personality of each monitored tamandua, correlating to: the behavioral patterns of eating and marking of territory; the living areas and the use and selection of habitats of each monitored individual; the activity pattern according to time and temperature. 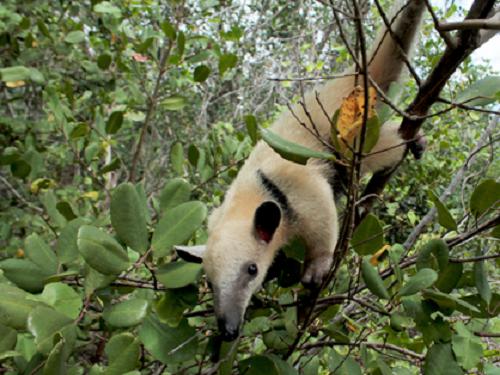 The lesser anteater (Tamandua tetradactyla) belongs to the Xenarthra Superorder. It is registered in all Brazilian states and biomes. It is considered a common species, but is present in a large number of federal protected areas and is rated Least Concern (LC) on the Red List of Endangered Species of the Ministry of Environment of the Brazilian Government and IUCN. Despite the current classification, the species is under pressure from several threats such as habitat loss for urban and agricultural expansion, burning, predation by exotic species such as domestic dogs, deforestation, collision with vehicles, hunting for meat consumption, use of pesticides and capture to become pets. Consequently, lesser anteaters are one of the most received mammals in rehabilitation centers and zoos in Brazil, increasing significantly the captive population of this species and with a low number of reintroduced individuals, mainly due to factors such as the management of individuals, imprinting and the high cost for monitoring.

Although it’s considered common, it is a species that is difficult to visualize, mainly due to its lonely, scansorial and twilight-nocturnal habits, thus becoming one of tamanduas’ species with less studies and information about its ecology and behavior, especially in situ.

This will be the first study that will survey temperament/personality data, eating and territory marking behavior data, and species-habitat relationship data of the Southern tamandua in Brazilian coastal zone.

The analysis of behavior and temperament in a free-living situation is extremely important for the knowledge of the natural history of the species, and it can be used as a basis for captive management, mainly aiming at the welfare, since they have predictable environmental conditions and do not have the same ecological situations and future reintroductions.

The research will be developed at Parnaíba Delta, located on the border between the states of Piauí and Maranhão, northeastern Brazil. The Delta is considered one of the best preserved coastal areas in the country, with predominance of northern mangroves, sandbanks and coastal Caatinga, areas of occurrence of lesser anteater, a species extremely important for maintaining these environments.

The results of this project will contribute to the biology and ecology data of the species. It is expected that the final product of this project be to produce and suggest management, reintroduction and monitoring plans for the conservation of the lesser anteater in its areas of occurrence.