Utilizing a second booster grant from the Rufford Foundation, we aim to continue a reciprocal transplant experiment to monitor the physiological impacts of new thermal environments on two species of reef-building Caribbean coral. We are using this experiment to track the acclimatization ability of these two species to new (and potentially more stressful) conditions in order to help project how the diversity and distribution of these species will change as the climate changes. 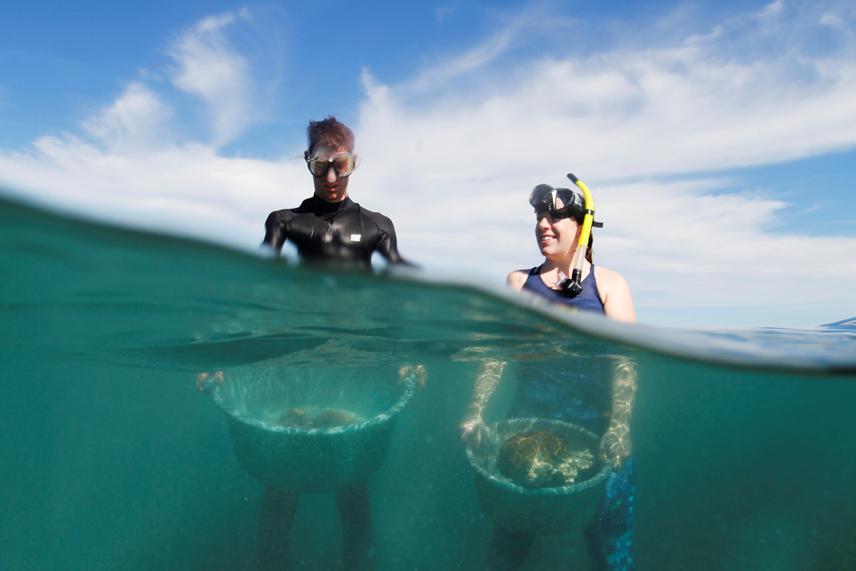 During the past three years I have learned that near shore massive corals in Belize grow faster than offshore ones in spite of living in warmer, more variable, and likely higher nutrient and sediment conditions. All of these factors are considered to be negative to coral health, indicating that some degree of thermal or environmental tolerance may have been granted to these near shore corals.

Increased resilience is generally thought to be acquired through acclimatization essentially a phenotypic change or adjustment to environmental conditions over the lifetime of a single organism, or adaptation genetic change over multiple generations. To determine if increased resilience occurs in near shore corals, I am conducting a reciprocal transplant experiment between near shore and offshore reefs in Belize. 6 colonies of 2 species of major reef-building corals were collected in December 2017. These corals were fragmented into 13 smaller pieces, 1 of which was collected as a time 0 control. 6 pieces of each corals were left on the home reef (where we collected the colony) and the other 6 were transplanted to either near shore or offshore. Corals were photographed and weighed after cutting. We will track changes in growth through surface area estimation and change in weight over time by taking time point measurements of weight and surface area after 3, 6, and 12 months. We will also monitor changes in a suite of physiological parameters (energy reserves, symbiont density, etc.) by collecting and freezing one fragment of each colony from near shore and offshore at each time point (3, 6, and 12 months).

Monitoring changes in transplanted corals over time and comparing with corals that were not transplanted will allow us to assess whether acclimatization to environmental conditions is occurring in our study species. Comparisons between near shore and offshore corals will allow us to determine if near shore species are better able to acclimatize. This is a hotly debated issue and one of massive implications. Corals subjected to more variable conditions are thought to accrue higher tolerance to variations. As the climate changes and human populations grow, coral reefs in the Caribbean will face new and additional stressors from temperature, ocean acidification, and direct human impacts. Corals that are best able to cope with variation will be in the best position to succeed.