By mooring remote cameras at 4 'cleaning station' areas of rocky reef in the diving region of Inhambane in Mozambique over a 2 year period, we aim to capture footage of the ‘critically endangered’ bowmouth guitarfish and whitespotted wedgefish, both of which are seen whilst diving on these reefs. This footage will provide the first in situ behavioural study of these animals, giving insight into inter-species interactions, cleaning, travelling and mutualistic relationships. This information will all contribute to highlighting the importance of these shallow reef areas that are exploited by local gill net fishers and international trawling vessels. This information will be used to educate local fishers and as a part of ongoing school education programs. 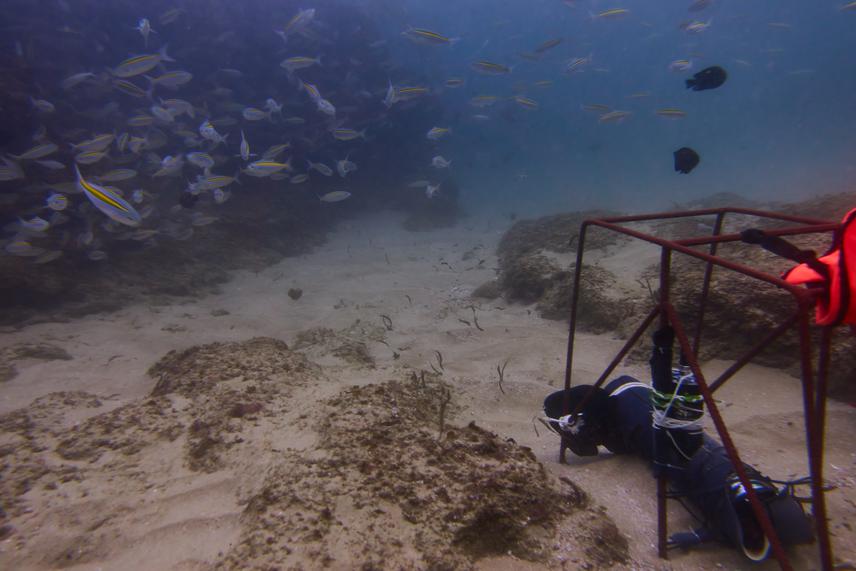 There is a desperate global call for more research concerning the critically endangered guitarfishes and wedgefishes. These species are mostly either “data deficient”, as they are so rarely seen and studied, or “critically endangered”, as they have the highest market value in the illegal international fin trade given the high concentration of ceratotrichia in their fins. Harvesting of shark and ray fins is common along the coastline of Mozambique. Two species in particular, the bowmouth guitarfish Rhina ancylostoma and the whitespotted wedgefish Rhincodon djiddensis, are both seen dead as victims of the fin trade on the beach, and seen alive on approximately 2% of SCUBA dives at 20-30 depth among the cleaning station areas of reef off the Inhambane coastline of Mozambique. Over a long-time frame (minimum 2 years), by way of regularly placing remote cameras pointing at the cleaning stations, it may be possible to gain insight in to their behaviours, interactions, individual movements, growth rates and even demonstrate the importance of the cleaning station habitats to their life cycle. This project intends to therefore fill a research gap in this area of these species’ range and represents the first in situ behavioural study of these species.

Following this, the motivation born from education to local fishers and community to protect these areas, after learning the results from this project and into the future, may help in providing a refuge for “data deficient” “critically endangered” wildlife, including the guitar and wedgefishes.