In the Mediterranean Sea, little research has been done along the north African/Middle Eastern coast. We lack the basic knowledge of species occurrence, abundance or distribution. This lack of data compared with the more active northern European side would have a severe impact on basin-wide assessment of these species. Hence it is important to support and encourage research related to population monitoring in the southern states of the Mediterranean. The main aims of the project are as following:

1. Estimating the abundance of the bottlenose dolphin population in Tunisia.
2. Investigate mortality rate, group and site fidelities and social behaviour.
3. Model the habitat of the species in the area.
4. Assess the interaction with fisheries.
5. Use the experience of the TDP team to expand the knowledge of cetacean’s research in the region.
7. Communicate the results of the project to different stakeholders and decision makers. 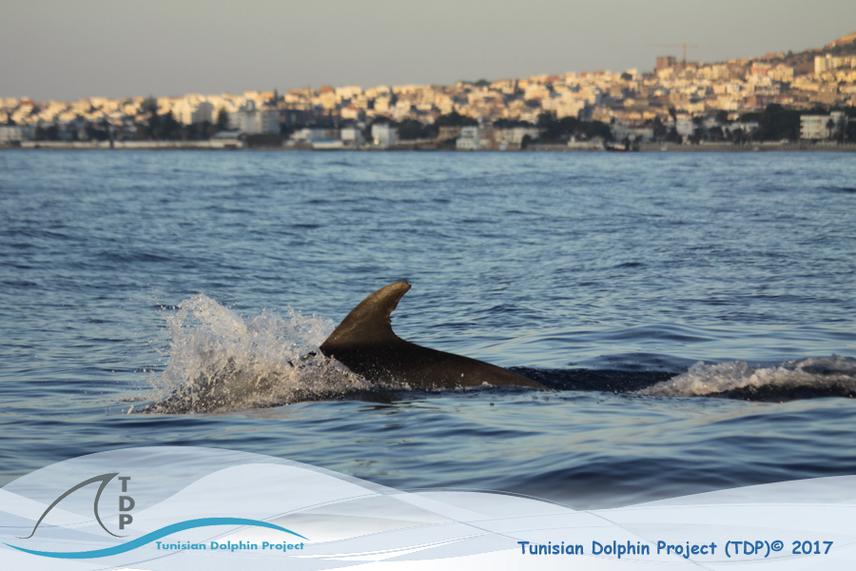 The project will be using Mark-recapture protocol (a.k.a photo-identification, Wursig and Jefferson, 1990; Rosel, 2011) to collect the necessary data to estimate the abundance of the bottlenose dolphin population in northern Tunisia. The method relies on conducting systematic (or random) field trips by boat. During each trip, photos of dolphin's dorsal fins will be taken with a specialised camera/zoom and information on number of individuals; composition (adults and calves); current and later behaviour; location; movement; speed; reaction to the boat; will all be recorded in dedicated forms. The photos taken by the camera will then be processed and will be included in a catalogue that contains a profile for each marked individual.

Through estimating the abundance, and then monitor the change in the population's trend on a regular bases, researchers can communicate these results to decision makers and the stakeholders and (if necessary) sound the alarm if the population is facing some decline. In this regard, the TDP has already acted based on the partial results collected during the period 2015-2018. An application was put forward to the Bay of Bizerte (37°17'00"N 9°55'30"E) to be included in the ACCOBAMS Cetaceans Critical Habitats criteria (CCH). The application was not approved due to the lack of data and publications. The same was made for the Important Marine Mammals Area (IMMA) but the area was not qualified due to the lack of data and it is now under pending (ranked as Area of Interest, AoI) and awaiting further data to be reconsidered. Therefore, the aim of TDP in the upcoming seasons of 2019/20 is to solidify and support the applications of the previous criteria. In the future, there is also the application to link the bay to the nearby MPAs of Zambra and Zembretta (37°07'10"N, 10°49'35.6"E) and Galite Island (37°31'40"N 8°56'00"E) to create a network of Marine Protected Areas (e.g. under the MedMPA criteria).