Trophic Structure, Bioaccumulation and Trophic Transfer of Trace Elements in Three Species of Cetaceans in the Gulf of California

The increasing human activities in the Gulf of California and the historical presence of mines in the California Peninsula call for the need to assess the health status of protected species. For this reason, this project aims to evaluate the accumulation and biomagnification of essential (copper, selenium, manganese and zinc) and non-essential elements, including heavy metals (arsenic, cadmium, mercury and lead), in skin and blubber of three species of cetaceans (killer whale, Orcinus orca, fin whale, Balaenoptera physalus, and bottlenose dolphin, Tursiops truncatus) and their prey from La Paz Bay, BCS, Mexico. These species commonly use La Paz Bay as feeding and nursery ground, which means that this area is highly important for their vital cycle. The bay is affected by an increasing number of vessels that operate in the area, and by a mining activity that has been carried out in the Baja California Peninsula for more than a hundred years. The species under study are subject to intense tourism activity that is currently unregulated. 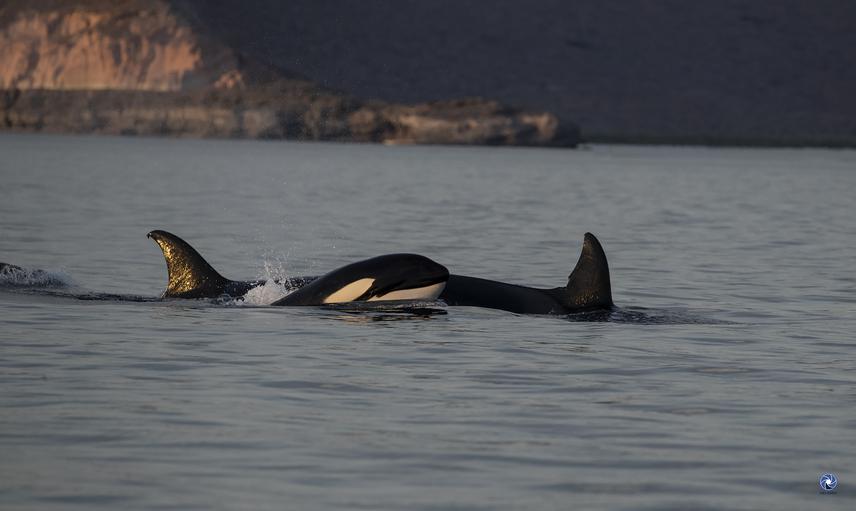 Orcas in the Bay of La Paz. Very little is known about the orcas of the Gulf of California; the presence of these animals is recorded throughout the year with abundance peaks during the mobulas’ breeding season. © Erick Higuera

In addition, at the beginning of 2021, due to issues related to the pandemic for coronavirus Covid-19, the Bay of La Paz has started to host large cruise ships that have been anchored for several months in the area travelled by fin whales, blue whales, orcas, dolphins and whale sharks. At the moment, La Paz city hall is considering approving a project in which the Bay would host about 150 cruise ships every year. This situation has created great controversy among citizens due to the chemical pollution directly related to the presence of these ships. Evaluating the impact of human activities on protected species is of fundamental importance to guarantee an effective conservation.