This project assists the long-term conservation efforts of Primate Expertise (PEx), a Congolese NGO working with local communities to protect the Kahuzi-Biega National Park and its endemic and critically endangered Grauer’s Gorillas in the Democratic Republic of Congo. I aim to use the power of media to facilitate the communication of PEx with local and international communities, to whom I will professionally produce two films. The purpose of the film for international audiences is raising awareness about PEx and raising funds. The film for local people aims to convey PEx’s message to a wide audience, to protect the park, and to recruit future local conservationists and researchers.

The ultimate goal of this project is to have more local people interested in the work of PEx, more youth interested in pursuing a career in conservation or wildlife science, and more international organizations learning about the conservation and education activities of PEx. 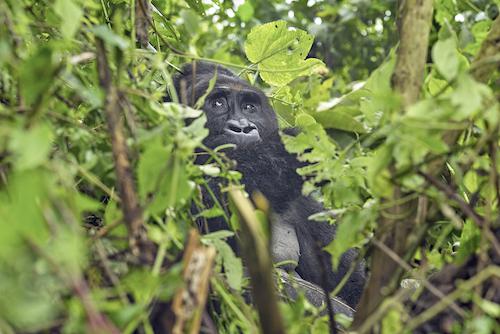 Kahuzi-Biega National Park is located at about 35 km distance from Bukavu town, near Lake Kivu, in South Kivu Province of the Democratic Republic of the Congo. It was established in 1970, and it is a World Heritage site since 1980. Ten percent of the 6000 km2 area is Montane forest, with great biodiversity. It supports, among many important and often endemic characteristic species, 15 primate species including the Eastern chimpanzee (Pan troglodytes schweinfurthii) and the Eastern lowland gorilla (Gorilla beringei graueri), endemic to the eastern forests of the Democratic Republic of the Congo. The Eastern lowland gorilla is critically endangered since 2016, with an estimated population of 3800 individuals, declining by 5% each year. The main reasons of the decline are poaching and habitat loss. Apart from the primate-richness of the region, there are also African forest elephants, Congo peafowls, leopards, buffalos, etc. living in the national park.

Primate Expertise, a Congolese NGO, works in and around the buffer-zone of the Kahuzi-Biega National Park. The reason I will collaborate with Primate Expertise is that their mission is very important and still neglected by most conservation projects: this NGO engages not only in direct conservation actions (alternative activities, forest monitoring, law enforcement, etc.), but also provides options for local people in remote, high biodiversity areas to become future conservationists and researchers. This is essential to protect these remote areas in the long-term.

Within the frames of this grant, two films will be made: one to internationally introduce the work of Primate Expertise, this way helping them to raise funds for their activities; and another one to raise awareness among local people about the work of Primate Expertise, helping the NGO to get attention, and to recruit potential future conservationists and researchers. The first film will be widely distributed online with the help of popular conservation journals, and social media, while the second film will be widely distributed locally in the buffer-zone of the Kahuzi-Biega National Park. Because the region is remote, and many villages do not have electricity, TV, etc, this part of the distribution will be carried out by a portable projector, by smart-phones, and also in the education center of Primate Expertise, which has a screening facility.