I will produce a short film to raise awareness among key decision makers in the Congo about the commercial bushmeat chain as a substantial threat to a future national park. My aim is obtaining support from authorities for increased capacity to monitor and control the illegal bushmeat trade. 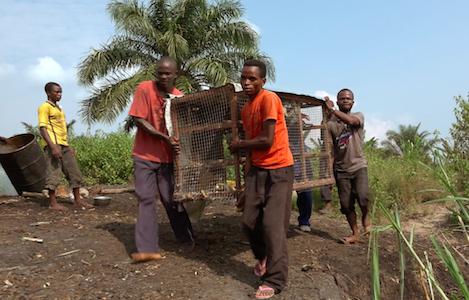 Conservationists John and Terese Hart have worked at the eastern edge of the bonobos' distribution area, the TL2 forest in the Democratic Republic of Congo, since 2007. This crucial habitat is home to endangered species including okapi, Congo peacock, forest elephant, and a recently discovered primate species. The Harts collaborate closely with local communities and national authorities to make TL2 a national park.

My aim is to promote the urgently needed protection of this critically important forest area. The commercial bushmeat chain is a major threat to TL2. Successfully protecting the area depends on facilitating communication. The project needs governmental support to increase the capacity to monitor and control the illegal bushmeat trade. I will produce short films about this threat for traditional, provincial and national authorities as target audiences, to raise awareness among the decision makers themselves. The goal is to get support from the authorities, particularly as follows:

• Motivating law enforcers: The lack of motivation facilitates corruption in every link of the bushmeat chain, from small-scale hunters to ivory traders. Inspired authorities are more likely to pursue prosecutions.

• Manpower: The number of park guards in TL2 is insufficient. Lobbying on the part of motivated local officials to the national parks authority is needed.

• Change in attitude toward local communities: The films will highlight the concerns, interests and fears of participants in the different links of bushmeat chain, including hunters, transporters, sellers and consumers. The interviews will aim to raise sympathy in decision makers, and stimulate them to consider problems and possible solutions.

The films will be shown to authorities by organized screenings. They will also be distributed via Internet, and possibly at international conferences to raise public awareness about the existence of these issues and encourage discussions and actions. The level of success can be monitored by assessing the response of the authorities, which would result in increasing support toward TL2 including education, raising the number of park guards, and changing attitude toward law enforcers and local communities.