The Nilgiri Landscape of southern India holds the single largest breeding population of Asian elephants in the country. The Wayanad plateau in the region that connects the evergreen forests of the Western Ghats with dry forest in the foothills is a critical summer habitat for elephants due to its unique geographical features fostering low-lying swamps and perennial streams. However, the forests of Wayanad received less management attention and degrading rapidly. Currently, increasing Human-Elephant Conflict is the biggest threat to the conservation of elephants and the wellbeing of rural communities here. In this context, the proposed project aims to understand the distribution of elephants and assess the pattern and drivers of Human-Elephant Conflict in the region. The outcomes of this project will greatly contribute to devising mitigation measures to reduce conflict for the conservation of elephants and their habitat in Wayanad. 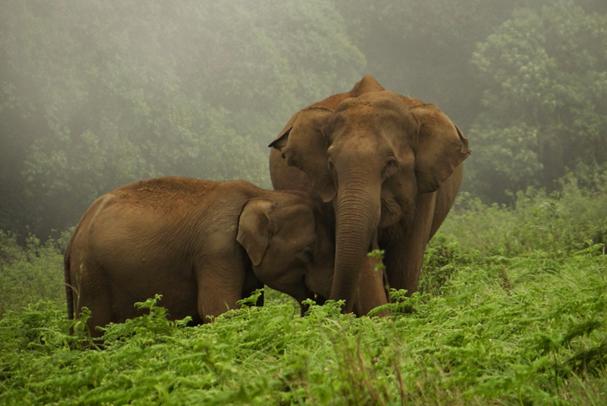 The Asian elephant is classified as Endangered (IUCN, 2014) globally and listed in Schedule 1 and Part 1 of the Indian Wildlife Protection Act (1972), conferring the highest level of protection. The Nilgiri landscape of southern India holds the single largest breeding population of elephants in the country and identified as a key landscape for the long‐term survival of this megaherbivore. The Nilgiris is prone to seasonal fluctuation in resource availability where a large tract of dry forest reduces its carrying capacity for elephants during summer due to lack of surface water and poor forage quality.

The Wayanad plateau in the Nilgiris is a critical microhabitat for elephants during summer due to its unique geography of low-lying swamps and perennial water sources. Despite the importance of Wayanad plateau for elephants, very little research has been carried out on any aspects of elephants and the forest is degrading drastically due to various anthropogenic activities. Currently, Wayanad is a ‘hotspot’ of HEC with 28 persons killed and 68 injured in the last 5 years. Increasing HEC situation is a major challenge for biodiversity conservation in the region.