The Western Ghats biodiversity hotspot supports about 25% of the wild population of Asian elephants. The Ghats expected to hold a minimum population of 10,000 elephants distributed in four landscape complexes. Among these, the Brahmagiri–Nilgiri–Eastern Ghats elephant Landscape (hereafter NEG) supports over 57 % of the elephant population, which is the largest single breeding population of the species at its highest density anywhere in Asia. The NEG is prone to seasonal fluctuation in resource availability where a large tract of dry forest reduces its carrying capacity for elephants during summer due to lack of surface water and poor forage quality. The Wayanad plateau of the NEG is a wet forest tract that supports numerous perennial water sources and low-lying swamps due to its unique geographical and climatic features. Hence, this region is expected to be an important micro-habitat for elephants in the NEG during summer. However, most of the plateau has been converted into human habitation and cultivation following India’s independence which left a small fragmented and degraded tract of forest. The remaining forest in the plateau still acts as a key wet tract for elephants in the NEG. However, very little research has been carried out in the region, and the forest is degrading drastically due to various anthropogenic disturbances. 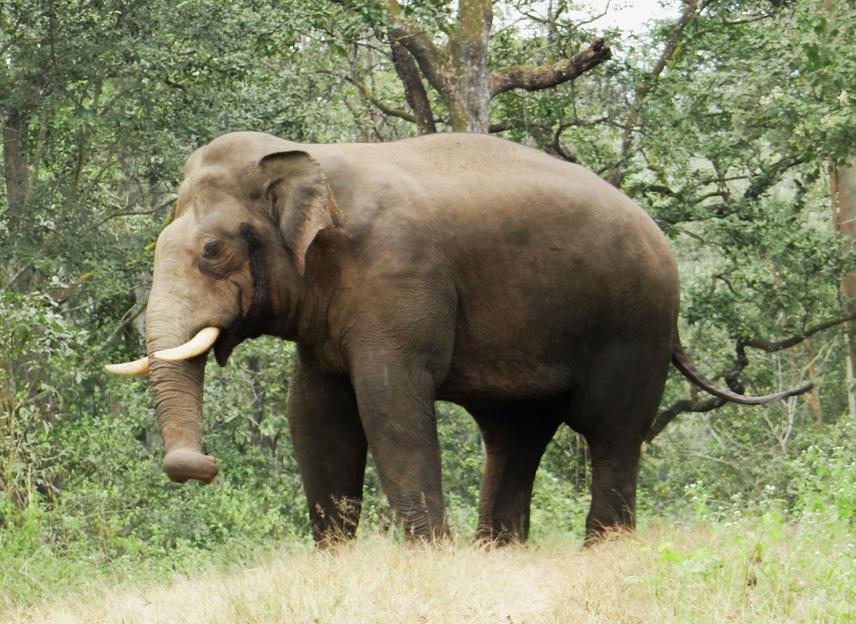 An adult male elephant in musth at Wayanad Wildlife Sanctuary. Bull elephants are reponsible for most of the crop raiding incidents and killing of people in Wayanad

Currently, increasing Human-Elephant Conflict (HEC) is the major social and conservation issue in the landscape. In the last ten years, more than 30 people lost their lives in the Wayanad district due to HEC situations. With the problem escalating over the years, it is evident that we are not making much headway. Our previous project revealed that the patterns of crop-raiding are mainly influenced by the individual behaviour of bull elephants. However, very little is known about the number of raiders, their sex, or the frequency of raiding mainly because raiding is largely nocturnal.

This project aims to identify all persistent and occasional crop-raiders in the landscape, study their movement pattern, and site fidelity to develop conflict mitigation plans in the future. This project will also test the efficacy of different conflict mitigation strategies used in the landscape to advise the best methods to reduce conflict situations. We also found that there is less availability of awareness materials to the key stakeholders about the importance of elephants and their habitat conservation in the study area. Hence, this project also aims to raise awareness about the importance of elephant and their habitat conservation to the key stakeholders.