Chytridiomycosis in the Endangered Darwin's Frogs: Developing Models for Their Conservation

To develop a chytridiomicosis risk assessment in R. darwinii, which will include the training of local people to ensure a population dynamic monitoring that can last over time. 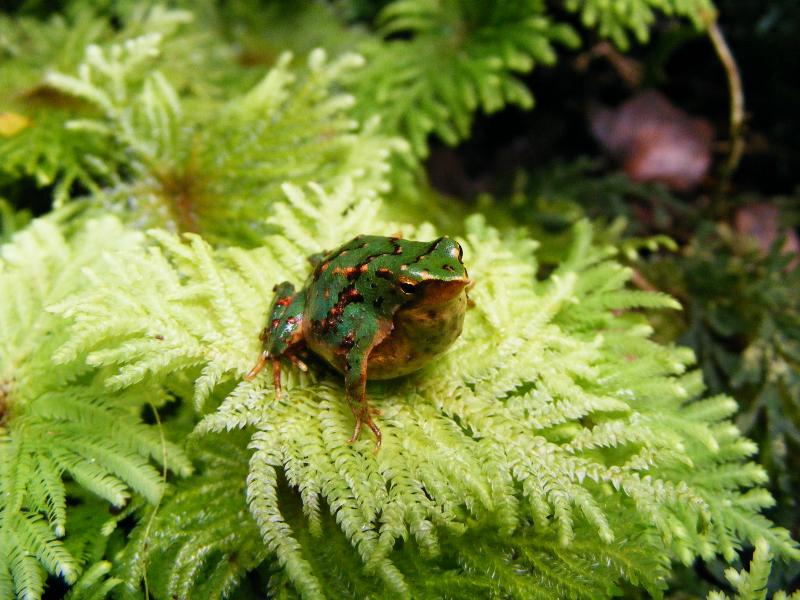 The mouth-brooding Darwin’s frog (Rhinoderma darwinii) is one of the most charismatic species of Chile, mainly due to its particular way of parental care termed “neomelia”, i.e. the male brood developing tadpoles within their vocal sac until metamorphosis take place; soon after this, tiny froglets are actively expelled into the environment. A rapid population decline and extinction of local populations have been described in R. darwinii. Furthermore, its sister species, R. rufum, is not seen since 1980 and today is probably extinct. Rhinoderma darwinii inhabits the temperate forests of south Chile and Argentina, which maintain high air humidity even in the dry months. Consequently, the loss of its habitat as a consequence of the replacement of native forests by commercial pine and eucalyptus plantations has been proposed as the main threat for its conservation. Notwithstanding, some populations of R. darwinii have disappeared from undisturbed/protected areas, leading researchers to propose alternative major threats; such is the case of the chytridiomicosis, a disease caused by the fungus Batrachochytrium dendrobatidis (Bd). Nowadays, the presence of Bd-infections has been described in R. darwinii and sympatric anuran species; however, negative impacts at the population level, although proposed, have not been fully evaluated.

The impacts of the chytridiomycosis at population level, in terms of individual survival and population growth, have been rarely evaluated in amphibians. With this project, we will provide strong evidence of Bd-infection effects in Darwin’s frog, at individual and population level, by monitoring eight R. darwinii populations with a capture-mark-recapture technique. Moreover, we will evaluate if seasonal changes in the susceptibility to the infection in this species exists. By the end, we will construct epidemiological models to predict the effects (across time) of the emergence of chytridiomycosis in a naïve Darwin’s frog population. Furthermore, since the goal of this project is to elaborate a disease risk assessment with conservation management purposes, we will develop a strong and direct work with local people. To train and involve local people in monitoring activities that can have a long-term future, we will work together with local NGOs and protected areas staff (park rangers, administrators, etc.) in fieldwork activities.

The disease risk assessment proposed here is highly required to elaborate adequate conservation strategies in Darwin’s frogs, which will permit to make an efficient use of available resources (both human and financial) for its conservation.