Conservation and Comparative Behavioural Ecology of the Southern Gelada (Theropithecus gelada obscurus) in and around Borena Sayint National Park, Ethiopia

The aims of this project are to examine the effect of habitat loss on the behavioural ecology of southern gelada by comparing two bands, and to investigate the key anthropogenic factors that affect their conservation and future survival. 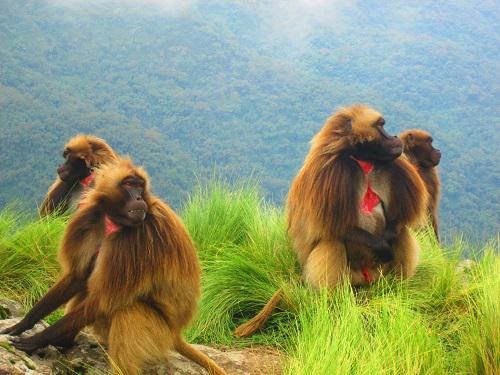 Geladas (Theropithecus gelada) are rare and endemic primate to the highland grassland ecosystems of Ethiopia. There are two formally recognized subspecies of geladas. These are Theropithecus gelada gelada and Theropithecus gelada obscurus (Grubb, 2006). Currently, T. g. gelada and T. g. obscurus are commonly called the northern and southern gelada, respectively. Extensive agricultural expansion, human settlement, livestock grazing and shooting are the main threats facing southern geladas. Currently, they occupy only 10% of their original grassland habitat (Gippoliti, 2010), and live in highly human dominated landscapes as the result of loss their preferred habitats. These forced southern geladas to raid cereal crops, resulting in potential conflict with local farmers. In turn, the local farmers shoot them to minimize crop raiding. These widespread habitat loss and human-gelada conflict pose a high risk of local extinction of this subspecies of gelada unless conservation actions are taken. In addition, unlike the northern geladas (T. g. gelada) which are well-studied, the behaviour and ecology of the southern gelada remains little known (Fashing et al., 2014). Specifically, nothing is known about the ecology and behaviour of southern geladas in Wollo (Gippoliti, 2010), a large region in Ethiopia’s central northern highlands.

Thus, the aims of the study is to compare the effect of habitat loss and degradation on the feeding ecology, activity budget, ranging pattern and habitat use of southern geladas by selecting two study bands (one living within the protected area of the Borena Sayint National Park and the other living outside the park in fragmented area), to examine the magnitude of human-gelada conflict, and to develop and inculcate awareness among the local communities on the value of southern geladas and their habitats.

This project is essential to understanding the habitat requirements, levels of ecological flexibility and behavioural adaptability, as well as to designing effective management plans for the long-term conservation of this little-known subspecies of geladas and their habitats. In addition, the project helps to implement effective conservation management strategies and awareness campaigns among the local people for the conservation of nature and biodiversity of the park and its surroundings.