The Jipe community is situated on the shores of Lake Jipe, next to Tsavo West National Park National Park in Kenya. The people here live very closely to a population of male elephants that spend the majority of their time feeding on the papyrus beds in the lake. The elephant population in the unprotected part of the ecosystem is hypothesised to vary seasonally. In this study we investigate the nutritional elements that elephants move to utilise papyrus beds dominated by Typha spp and papyrus reeds. The human-elephant interaction in Jipe is tolerant and pupils interact with these elephants on a daily basis to and from school. Thus, this study aims to specifically: (a) determine the distribution of nutrients in the papyrus lake beds; (b)determine physiological stress variation between resident and non-resident male elephants between dry and wet seasons and (c) enhance environmental education awareness to the local community and motivate human elephant coexistence. 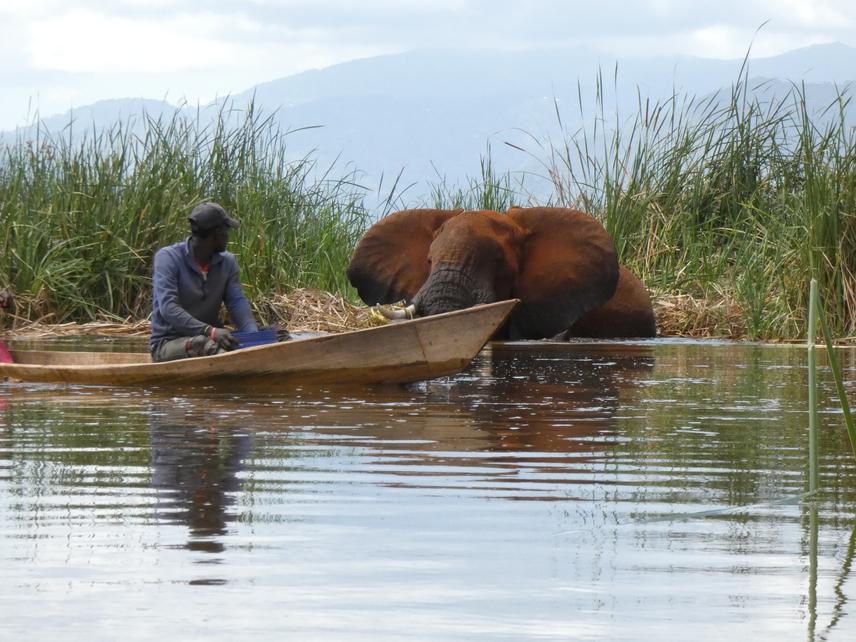 Fisherman resident to Jipe sails past staring Fluke who was feeding on the papyrus bed behind him. © Zak M. Muteti.

Twelve Plant tissue samples from Lake Jipe papyrus beds and the adjacent matrix will be collected during the wet and the dry season for nutrient elements analyses in the Kenya Plant Health Inspectorate Service (Laboratories) in Nairobi Kenya. One hundred male elephant dung samples will be collected on the shores of the lake upon defecation, preserved by freezing until laboratory analyses for stress hormone level variation across wet and dry seasons. PowerPoint presentations, environmental awareness films, murals and photographs will be used to inform the local populace and Jipe Primary School’s Environmental Education Program in partnership with Save the elephants. Semi structured questionnaires will be administered to residents that have lived in Jipe for more than 40years.

Project outputs include a bull elephant catalogue of Lake Jipe’s residents; all identified, and their ages estimated. The catalogue will be made available to the locals through public awareness sessions and through pupils in the form of a booklet. Two laboratory reports showing nutrient distribution in Jipe and stress level changes in resident bulls will be produced. 276 Jipe Primary school pupils will enjoy 6 months of Environmental education. The history of papyrus beds and their utilisation over the years by both human and elephant populations. This project forms bulk of my MSc thesis.