The project aims to:

(i) Increase local youths’ awareness and understanding on how marine debris enters the Saleh Bay and the impacts of marine debris to marine biodiversity and subsequently to people’s wellbeing.

(iv) Create of a network of change makers and its campaign strategy.

The creation of a network consisting of champions who are capable of conducting 3R training and campaign is expected to create a riffle effect in Sumbawa District. They will be able to create other change makers with the skills they will obtain from this project. They will also be able to generate income by their recycling activities. 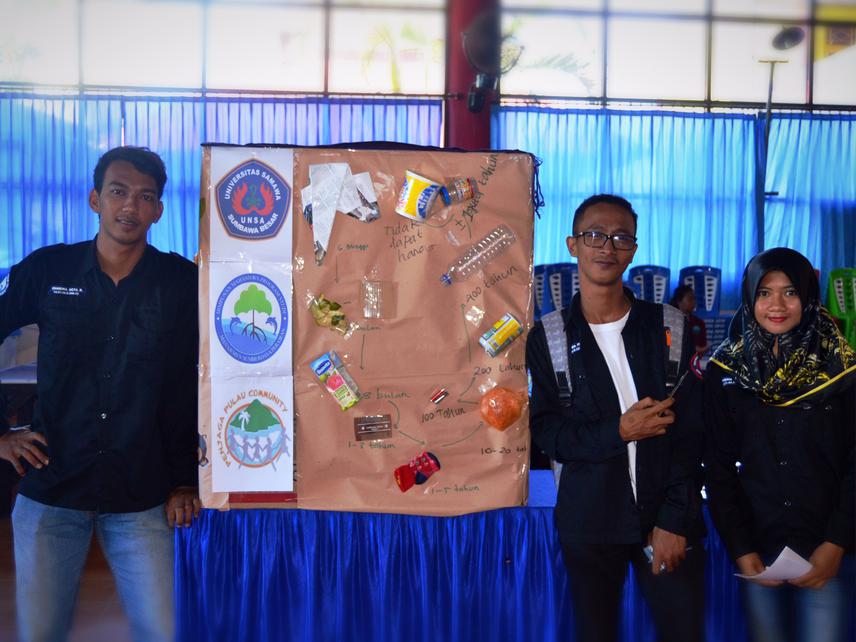 Talkshow and campaign in University.

Marine debris adverse impacts on marine biodiversity have been reported over the last four decades. Indonesia is the second largest contributor to plastic marine pollution. Across the country’s 17,000 islands there is poor public understanding of the problems created by plastic waste. The coastline of Saleh Bay in the lesser Sunda is not an exception despite its high marine biodiversity and economic values. Therefore, this project will create a network of change makers in Saleh Bay who are able to cascade training on 3R and undertake campaign to wider community in Saleh Bay areas to reduce plastic marine debris.

Saleh Bay is one of the biggest bays in the lesser Sunda. It covers area around 1,495 square kilometers with coastline around 282 km. Saleh Bay is designated as ‘world aquarium’ by the Indonesian Institute of Science (LIPI) due to its rich marine biodiversity. Many kinds of marine biota can be found in this area such as grouper, mackerel, snapper, scallops, jelly fish, dolphins, whale, etc. At least there are 405 species, 143 genera, and 47 families of reef fish and 69 genera of corals (Edrus et al. 2010). Saleh Bay is an important fishing ground. It provides approximately 70% of the total marine resources in Sumbawa Regency.

The conservation outputs from this project are:

(i) Map of marine debris sources in Saleh Bay. This map will improve local stakeholders’ awareness and understanding about how land-based waste enters the marine environment in Saleh Bay. We will use this map to communicate and discuss with relevant government agencies to encourage the formulation of appropriate policies or regulation. The formulation of policies or regulation is beyond this project timeframe.

(ii) 3R training module. The module can be used in other villages or schools. The training can be easily replicated. Beyond this project, the local youth will be able to cascade the training to other communities.

(iii) Campaign strategy. It is foreseen to be quite comprehensive covering how to engage local government to formulate a supportive regulation and infrastructure for waste management, how to promote the branding and marketing of recycled products and how to reduce wider public’s use of plastic bags. The strategy will be consulted with relevant stakeholders. Although the strategy is quite comprehensive, we will set feasible targets in the beginning because small successes will act as a fuel for bigger targets.

(iv) Campaign materials and tools that are locally-relevant.