Monitoring and Conservation of the Vinaceous Parrot in Western Santa Catarina, Brazil

The Vinaceous Parrot (VP) is an endangered species according to the IUCN, but there is no statistical assessment of its population size. With previous Rufford support, we developed a roost counting technique to estimate the VP population in Western Santa Catarina (WSC), combined WSC estimates with range-wide counts, and estimated the global population at c. 5,000 individuals. Now we aim to improve knowledge of VP distribution and population trends using 1) roost counts, 2) a network of local residents living near VP habitat, and 3) integration of VP sightings—including citizen science data—into a probabilistic model of VP distribution. 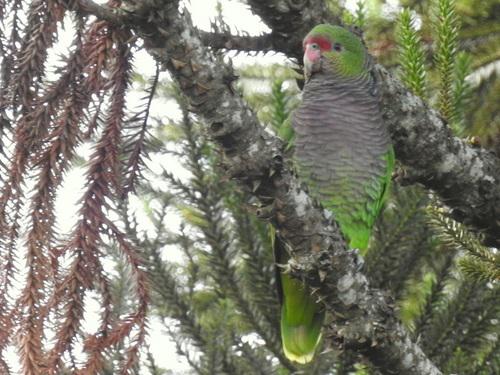 Conservation action should be guided by robust inference of population size, as well as its changes in time and space. Two counts of the same population may result in different numbers due to sampling accident alone. For this reason, inference of temporal change requires a statistical assessment to quantify uncertainty about estimated abundance at any time. The same applies to the inference of spatial distribution. For the last three years we monitored the Vinaceous Parrot (VP) population of Western Santa Catarina (WSC), Brazil, an area home to nearly 25% of the known VP population, contiguous with the only non-Brazilian portion of the species’ range (the Argentinian province of Misiones). The large expanse of VP habitat available outside WSC motivate our interest in monitoring beyond that area. With VP sightings distributed over thousands of square kilometres and three countries, it would be unreasonable to attempt monitoring the whole species’ range with our small team. There are, however, more than two dozen other teams of ornithologists counting VP and hundreds of VP sightings in citizen science repositories. 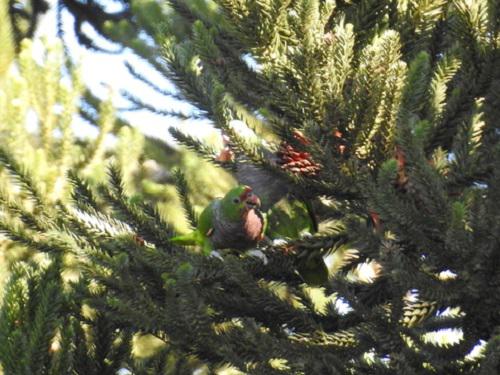 This project will integrate information collected by multiple teams and techniques into statistical assessments of the VP range and abundance in two scales: one local (at WSC) and one broad, looking at the whole range of the species. At local scale, we will continue the VP population monitoring and, by the end of this project we will have four consecutive yearly estimates of WSC abundance and an assessment of temporal variation of the population size. At the whole range, integrating the VP researcher’s and citizen science information we will improve the distribution map and identify the conservation priority areas for the species. Our permanent network with other researchers and residents will facilitate the collection of information on the VP population. The more we engage the residents in our efforts to monitor the species, the more they will support our conservation actions.