Around the world, many primate’s species bark-strip trees in plantations, generating great losses to timber producers, who commonly respond by killing monkeys and endangering their populations. The aim of this project is to understand the causes of the bark-stripping behaviour of black capuchin monkeys (Sapajus nigritus) in northeastern Argentina, in order to evaluate a solution to the conflict between foresters and primates. We will study the spatial and trophic ecology of capuchins in pine plantations and we will test the effectiveness of distracting feeding technique to reduce the damage to the trees and thus protect black capuchin populations. 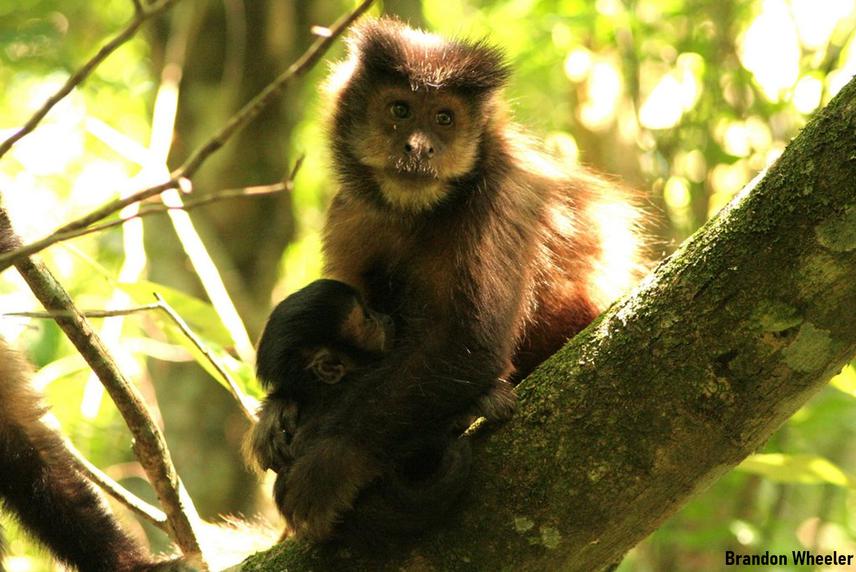 Around the world productive activities are replacing native forests and many animal species still persist in these new anthropogenic landscapes. Little is known on how animals use these landscapes in which conflictive relationships with humans frequently occur. Several primate species bark-strip trees in plantations to consume their inner bark (phloem), producing economic losses to timber producers. This conflict is particularly acute in the Argentinian and Brazilian Atlantic Forest, where black capuchin monkeys (Sapajus nigritus) bark-strip pines (Pinus taeda) in plantations. In many countries, including Brazil and Argentina, producers respond to this conflict with unethical methods, such as killing primates thus affecting their populations. All mitigation techniques have been ineffective or even counterproductive, probably because the reason why primates bark-strip trees is still not clear. The objectives of this project are: 1) to test a new hypothesis according to which primates consume the phloem of pines during the spring because it becomes a profitable resource during the tree growing season; 2) to use the case of black capuchin monkeys as a model to study how primates use productive landscapes; 3) to conduct a diversionary feeding experiment aimed at mitigating bark-stripping by primates and thus protecting their populations.

The study area, located in the Atlantic Forest of Misiones, Argentina, is dominated by pine plantations and fragments of native forest, where groups of capuchin monkeys survive. The phenology and nutrient content of inner bark and native foods will be studied during a two-year cycle to estimate the profitability of the different food resources. The pattern of damage produced to pines will be also monitored during a two-year cycle. Individuals in four capuchin groups will be fitted with GPS-collars and followed during two consecutive springs, when capuchins bark-strip trees to study their space-use- ecology. Two of these groups will be followed intensively during a whole year cycle to study their behavior, diet, and habitat use. During the second spring, we will use artificial feeding platforms to perform a diversionary feeding experiment with the four GPS-tagged groups to assess changes in landscape use and pine bark-stripping intensity as a response to this management technique. The results of this project could be used to reduce damage to plantations, ameliorate conflict and protect primates in human dominated landscapes.