Fish on a Mission: Assessing the Role of Herbivorous Fish in Maintaining Coral-Algal Balance on Post-Disturbed Reefs of the Andaman Islands, India

The reefs of the Andaman Islands have been impacted by a series of catastrophes, including the 2016 mass bleaching event. Studies have shown that post-disturbance, dead reefs get colonised by algal communities, and herbivory plays a crucial role in mediating algal growth, thus promoting reef recovery. Our aim is to study these processes by which herbivores maintain the coral-algal balance on reefs at a local scale. We will carry out underwater surveys and in-situ experiments and share the findings with authorities who are in the process of formulating conservation plans for coral reefs in the Islands. 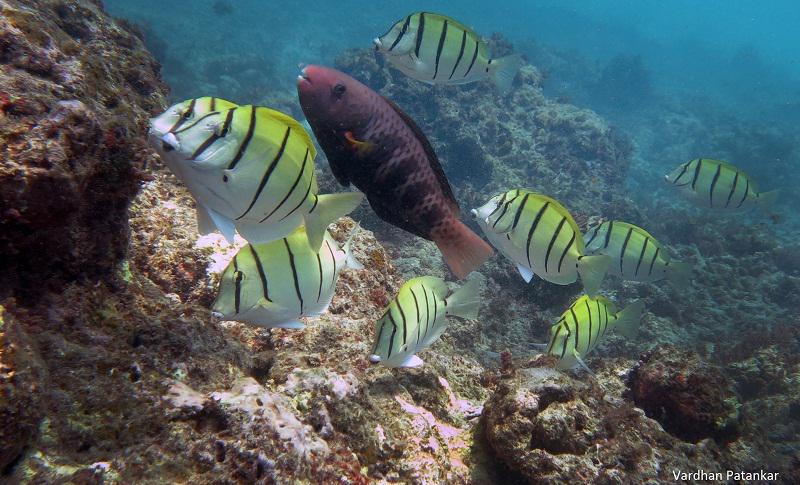 The reefs of the Andaman and Nicobar Islands have been impacted by a series of natural disturbance events, the most recent being the El Niño-Southern Oscillation induced mass coral bleaching of 2016. Post bleaching, dead reefs can get colonized by algal communities that include turf algae, filamentous algae and, fleshy and calcified macroalgae. These communities are fast-growing and can out-compete the coral larvae for light and substrate, in turn affecting the reef recovery process. Overgrowth of algae on reefs can result in a phenomenon called ‘phase-shift’, in which, the algae replaces the corals as a dominant species on reefs, resulting in a low-yielding and a highly unstable reef substratum.

Different functional groups of herbivorous reef fish (which includes Parrotfish (Scaridae), Surgeonfish (Acanthuridae), Rabbitfish (Siganidae) etc.) are known to play important ecological roles in maintaining the coral-algal balance by voraciously foraging on the algae and in turn clearing substrate for coral recruits to settle and thrive. They thus stabilize the reef system by maintaining the overall structure and composition of the algal community, preventing phase-shifts and aiding in post-disturbance recovery.

Although, few studies from the Andaman Islands have shown instances of high algal growth in certain reefs, the role of herbivory in mediating post-disturbance reef recovery is relatively less known. Through this project, I will be studying the processes, by which herbivory acts as a top-down force in controlling algal overgrowth and maintaining the coral-algal balance on the coral reefs in the Andaman Islands. The findings will help in understanding how local processes influence post-disturbance reef recovery and thus aid in the existing reef conservation and management efforts in the Andaman Islands.