Biomonitoring and Bioassessment of Fish Community Structure in a Marine Protected Area with Environmental DNA Metabarcoding: A Pilot EDNAM Project

On a global scale, human impacts on the natural world are now driving a sixth mass extinction event, and accumulating evidence indicates that biodiversity is not being effectively conserved. Within marine spatial planning frameworks, marine protected areas (MPAs) are important tools to promote ocean health, and to build social, ecological and economic resilience (i.e., Blue Economy). Reel Science Coalition (RSC, non-profit organisation) has been engaged in planning and implementing a shore-based research program within the Helderberg Marine Protected Area (HMPA) of South Africa for assessing and monitoring surf-zone fish community composition and species abundance with seine net and tag-and-release surveys. The structure of fish assemblages accounted for by different sampling methods (e.g., net types, visual surveys) can differ significantly, even among similar ones, in terms of species composition, functional groups (ecological and trophic guilds), and fish size distribution. Consequently, a cross-validation of fish sampling methodologies is necessary to ensure standardization and comparability of monitoring methods. Environmental DNA (eDNA) metabarcoding is a novel, non-invasive method of monitoring and assessing biodiversity wherein samples are taken from the environment via water, sediment or air from which DNA is extracted, and then amplified using general or universal primers in polymerase chain reaction and sequenced using high-throughput sequencing (HTS) to generate thousands to millions of reads. 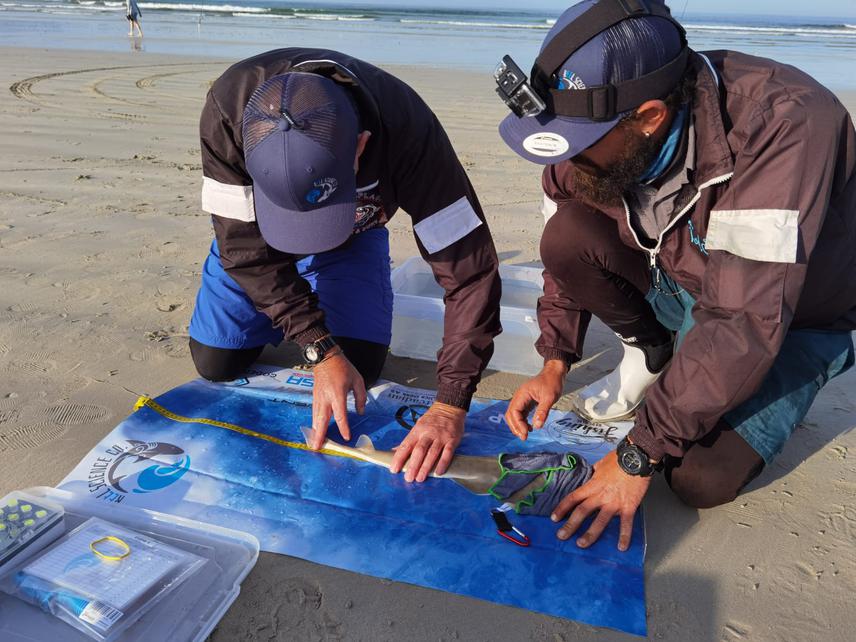 Reel Science Co. affiliated anglers working in teams to ensure all fish are handled carefully and that the tagging is performed quickly to reduce air exposure.

The proposed project aims to apply marine eDNA metabarcoding, at a temporal and spatial scale, as an alternative for the monitoring and assessment of fish communities in the HMPA, to get a near-holistic view of fish community structure and site occupancy rates in the HMPA, and to understand the strengths and limitations of each sampling approach. It is envisaged that eDNA metabarcoding will enable genetic-informed management actions necessary for marine ecosystem management, and to protect and sustain the Blue Economy.