This project combines research into this very rare species with practical measures to assist its conservation. 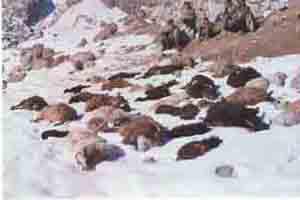 Sheep and goats killed by a snow leopard in Baltistan.

The Northern Areas is one of the poorest regions of Pakistan, itself one of the poorest countries in the world. It contains some of the world's highest mountain ranges and is host to a diverse flora and fauna, including the charismatic Snow Leopard.; The Snow Leopard, an IUCN Endangered species, currently survives in small population pockets. However it faces both human threats such as retaliatory killing following predation of livestock and hunting for body parts, and natural threats such as genetic isolation and prey reduction.

Shafqat Hussain is currently a Policy Fellow in the Sustainable Use Initiative at the IUCN in Washington DC. Previously he spent five years working in Pakistan, his country of birth, on biodiversity conservation with the IUCN. He also worked on sustainable rural development with the Aga Khan's Programme in the Northern Areas and North West Frontier Province.

For there to be any hope of survival for the Snow Leopard, the conflict between it and the livestock herders has to be resolved. He has therefore designed a project that combines surveys of and research into this little studied species, and conservation awareness programmes for local communities using theatre and radio stations. In addition he plans to introduce an insurance scheme to reduce the impact on farmers of livestock predation by Snow Leopards. Shafqat also hopes to develop a range of ecotourism activities such as Snow Leopard Treks, which would generate further income for the insurance fund.

Shafqat received his Small Grant as one of the runners up for the Whitley Gold Award 1999.