Conflict to Coexistence: Training Locals to Save Themselves and the Elephants in Chitwan

Human and Elephant: Conflicts to co-existence in Eastern Terai of Nepal

Conservation of elephants in the human-dominated landscape depends on the ability of human communities coexist with elephants. This project aims to create coexistence by reducing human casualty. Human casualty is the extreme form of conflict which needs to be avoided to get people’s support for conservation. Awareness about elephant behaviour and responsible actions of people towards elephants can greatly reduce such casualty.
Thus, we will conduct a TOT for local resource persons, a series of trainings in community and broadcast radio jingles about human-elephant coexistence. We will also assess the extent of human-elephant conflict in and around Koshi Tappu Wildlife Reserve. 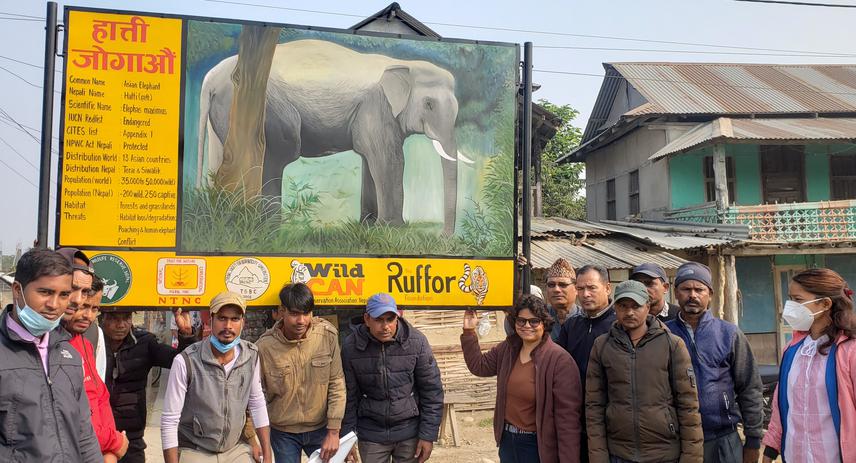 In Nepal, wild Elephants are confined in narrow strip of highly fragmented Siwalik/Terai forests in four subpopulations. One of the sub-populations in eastern Nepal includes 15-20 resident and ~100 migratory elephants. Human density is also relatively high in this region (434/km2; CBS, 2011). Thus, Eastern Nepal is hotspot for the human-elephant conflict.

Human-elephant conflict (HEC) especially, elephant attacks on humans has become one of the major challenges for elephant conservation. In most of the cases, elephant attacks people (67% leads to death, Acharya et al. 2016) when they try to chase elephants feeding on their crops or raiding their stored grain. People sometimes approach too close to such elephants or provoke elephants to become angry. Such elephants attack humans causing injury or death. The project aims to reduce such human casualties from elephants to minimum through awareness programs in targeted areas and communities. Through this project, I also want to enhance the capacity of local communities to manage conflict and ensure the human-elephant coexistence in periphery of the Koshi Tappu Wildlife Reserve in Eastern Terai of Nepal.

The project will reach directly to more than 500 local residents living in forest fringe of elephant migration routes in. Indirectly through the different mass awareness programs (brochure, posters and radio program), the project will reach to more than 100,000 people. A toolkit in local Nepali language (training manual, flip charts, poster and brochure) will be developed to conduct awareness camps to vulnerable communities which can also be adapted to other areas in Nepal for awareness programs. To maximize the impact, a group of youths will be selected and provided Training of Trainers (TOT) on human-elephant coexistence. Then they will organize multiple mobile awareness camps in targeted communities when elephants are visiting the nearby forest. Participants of the awareness camp will learn about the elephant ecology, causes of human elephant conflict and act responsibly towards elephants. We will also carry out the questionnaire survey with the locals to understand the nature and extent of the damage caused by elephants.