Comparative Study of Populations of Mangrove Crabs from Six Mangrove Ecosystems in Cameroon: Implications for Conservation

Conservation and Assessment of the Extinction Risk of a Threatened New Species of Endemic Freshwater Crab Louisea nkongsamba, from Mt. Nlonako, Cameroon

The proposed project is focusing on the conservation of and monitoring strategies for two populations of a threatened species of freshwater crab, Louisea yabassi. This species was rediscovered after over 110 years during the work within 2nd Booster grant from Rufford. The Ebo Forest is a key biodiversity hotspot in Cameroon with the Cameroon’s largest remaining tract of primary lowland and submontane rainforest and a high conservation priority because of its species richness with many endemic and threatened species. The discovery of the threatened species L. yabassi in this area adds freshwater crabs to the latter. Preliminary surveys indicate that this newly rediscovered species is facing immediate threats to its freshwater habitat from forest destruction, agricultural encroachment, water pollution, and firewood collection. The imminent threats underline the urgent need to provide vital biological data/to conduct more research aimed at implementing conservation interventions/actions (for the first time) to save this ‘critical endangered’ and threatened endemic species from extinction and to monitor changes in their populations and habitat for conservation interventions. 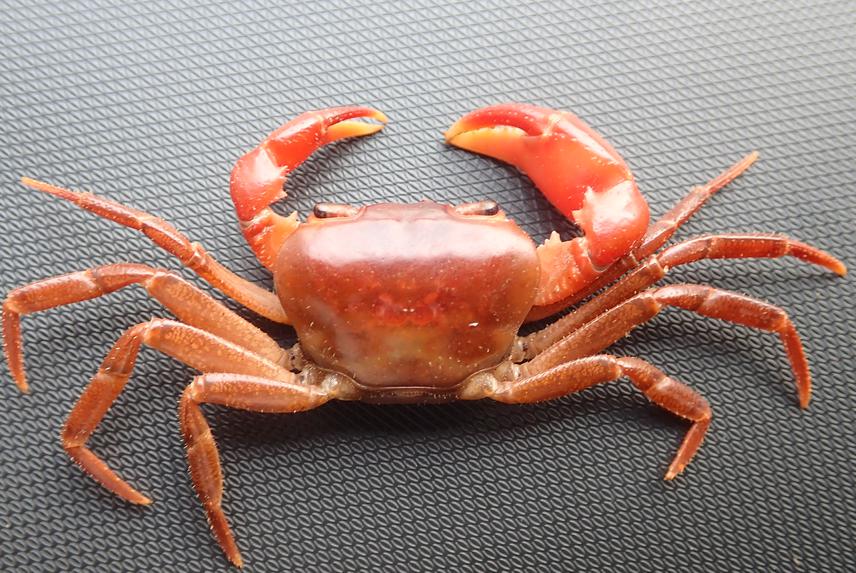 The proposed project consequently has two important objectives: (1) It will provide crucial information on habitat, distributional range, reproductive biology, phylogeography, and evolutionary relationships of Louisea yabassi and (2) help to assess the activities of local foresters, hunters, farmers and fishermen within Ebo Forest, specifically the locality where L. yabassi was rediscovered and their impact on the rich endemic freshwater crab fauna.

In order to achieve these aims, I have designed a comprehensive and ambitious work plan including activities that range from measuring water parameters and obtaining a comprehensive set of biological variables for the populations of L. yabassi (and other crab species encountered at these sites) including sampling for further morphological and molecular study to recording human impact (e.g., agricultural encroachment, camps etc) along transects at these sites. In addition, in-situ keeping to living specimens of L. yabassi will provide insight into its breeding cycle. All resulting data will be used to assess the risk of extinction of L. yabassi according to the IUCN Red List Categories. Data will be pooled with those from previous projects on three other species of Louisea.

I also planning to use the data from the planned study and conservation assessment of L. yabassi to educate and enable local people to adopt practices that are less damaging on the forest ecosystem and likewise the crab’s most sensitive habitat (as its survival seems to be dependent on the canopy remaining intact). The education/capacity building component in this project is very important for the sustainability and long-lasting success of the whole project. The conservation educational sessions proposed here will be the ongoing throughout the lifetime of the project, as they will involve cooperation with local authorities (Chiefs of villages, Sub-Prefects and Prefects) and aim at including as many people as possible (75-95%) who live and work in the Ebo Forest zone and provide an understanding of the importance of conserving endangered species and the steps that are needed to protect them from extinction.