In coastal ecosystems, the structure and population genetics of plants may be associated with factors such as sea level fluctuations, past climate changes, and ocean currents. However, it is important to highlight that the role of these factors on the population dynamics of mangrove tree species is not yet fully understood. Despite its great socioeconomic and environmental importance, information on the genetic structure, spatial distribution and composition of mangrove tree species along the Brazilian Amazon coast is poorly known. 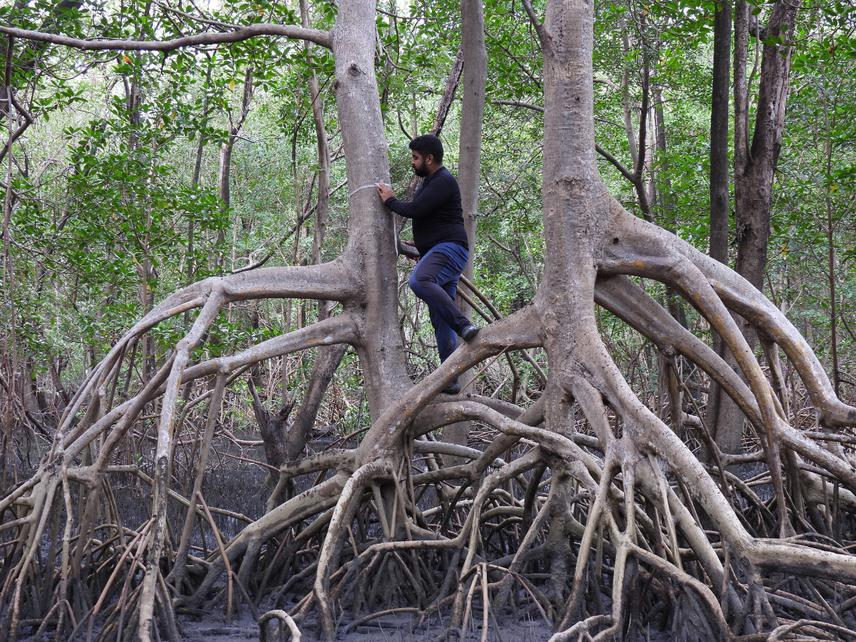 Measurements in an individual of the species Rhizophora mangle L.

Thus, the present proposal aims, using the ecological biogeography approach, to understand how the unique environmental factors of the Amazonian coast influence the composition and structure of the populations of the six mangrove species in this region: Rhizophora mangle L.; R. racemosa G.F.W. Meyer; R. harrisonii Leechman; Avicennia germinans (L.) L.; A. schaueriana Stapf & Leechman ex Moldenke, and Laguncularia racemosa (L.) C.F. Gaertn. The pattern of genetic structure of these mangrove tree species will be investigated based on a large volume of data obtained by using the next-generation sequencing (NGS). Such information will help to determine the level of gene flow among populations throughout the distribution of the target species, describing the pattern of natural hybridization between the lineages/species.

A field campaign will be carried out in each of the states that make up the Brazilian Amazon coast: Amapá, Pará and Maranhão, where circa of 80% of Brazilian mangroves are concentrated. The area occupied by the mangrove ecosystem is about 7820 km², distributed as follows: Mangrove forests: Amapá (830 km²), Pará (2100 km²), and Maranhão (4350 km2) and Salt flats: 540 km2. As a result, the evolutionary history of these species will be reconstructed, considering the dynamics of this ecosystem and how historical barriers have influenced current genetic variability. Such information is relevant for the better understanding of how future environmental changes can affect this system, according to the degree of connectivity between populations/tree mangrove species that occur in the largest continuous belt of mangroves on the planet.