Lake Tanganyika hosts more than 315 littoral cichlids species of which approximately 98% are endemic. These species are strongly linked to a habitat-type throughout the littoral zones. However, there are currently many threats facing littoral-cichlids and their critical habitats often leading to population decreases, particularly for cichlid-species with economic interests. Previous ﬁgures from Lake Tanganyika north-western shores indicated intense littoral-ﬁshing-activities, globally unsustainable on cichlid diversity, which is declining while studies on their ecology still fragmentary. Fishing-gears with small-sized-meshes and unsuitable ﬁshing-techniques were common, mostly reporting smaller-sized ﬁsh, especially those of economic interests. Moreover, there is an increased lack of littoral-ﬁshing regulations and conservation measures locally. Here, we seek to collect and disseminate ecological and socioeconomic data on common Lake Tanganyika littoral-cichlids in catches to strengthen conservation eﬀorts. An overview on shoreline ﬁshing-activities, species-richness and specific-threats will be provided and ways-forward given to encourage sustainable management measures at Lake Tanganyika. 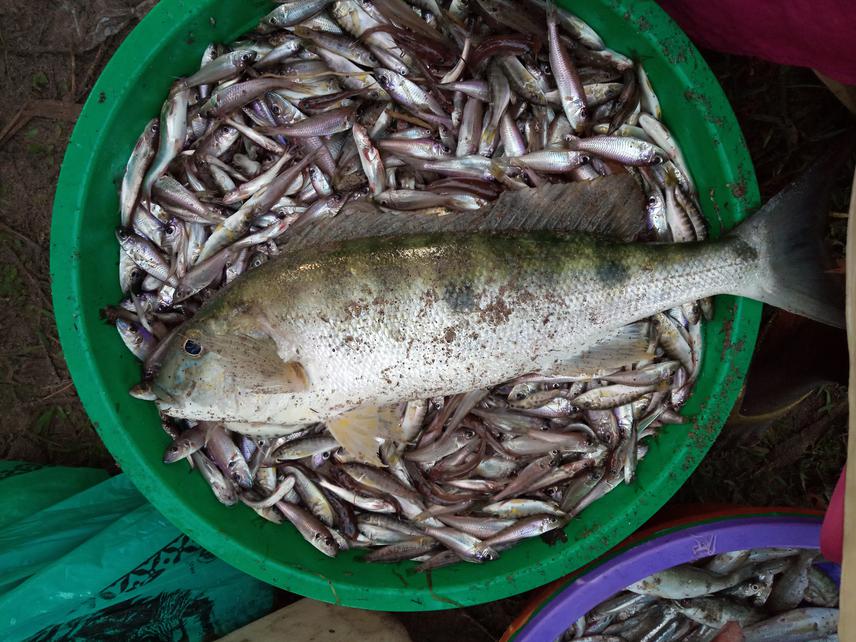 A sample of mixed cichlid species caught by an encircling liftnet, including a large B. microlepis and its juveniles at Munene, Fizi

Lake Tanganyika littoral areas are of higher diversity, especially in cichlid teleost of unsurpassed speciation and economic values. However, these critical habitats and their ﬁsh-fauna are undergoing multiple alterations (e.g., overﬁshing, water pollutions, habitat-loss, sedimentation, and lake-global warming) often leading to species loss and local extinction. Along Congolese shorelines (depth 0–20 m) of high human inﬂuences and ﬁsh protein demands, many littoral-cichlid species are mostly targeted by local-ﬁshers by employing different gears. Most of these fishing-gears and techniques are no longer sustainable to littoral-ﬁsh stock due mainly to their smaller mesh-sizes mostly capturing smaller-sized ﬁsh. Earlier data based-stock analysis reported a strong shortage of some cichlid species of commercial interests from many locations between Uvira and Fizi territories.

Cichlid species are particularly vulnerable to intense ﬁshing further to their longevity and fecundity. Thus, such threat is not yet better illustrated due to the limited key ecological studies on each targeted littoral-ﬁsh species and habitat. Otherwise, ﬁshery sector faces management problems (lack of conservation measures, low legislation, or uncontrolled rapid increase of ﬁsher’s number), especially in Lake Tanganyika Congolese shores of Uvira and Fizi. Though actively intense, this littoral ﬁshery still ignored in many aspects and many actors are unaware on threats arising from their activities to the ﬁsh resource. Detailed studies on these ﬁshing-activities combined with ﬁsh ecology still limited; eﬀorts to stimulate more insights into management and legislation initiatives are needed.

To manage ﬁsh resources, this project will examine the littoral ﬁshing ﬂeet from Lake Tanganyika north-western parts by collecting ﬁsh-data (experimental and commercial catch), environmental features and conducting socioeconomic surveys with education techniques in the ﬁeld. We intend to investigate the littoral ﬁshery of cichlids with more emphasis on their ecology (i.e., population status, reproduction, distribution, habitat requirements and ﬁshery ﬂeet status) of common species and to sensitize all stakeholders on the threats facing this resource in order to promote sustainable preservation of Lake Tanganyika littoral cichlid communities. The project ﬁndings will present high potential beneﬁts for the communities, decision-makers, and future researches in term of biodiversity conservation at Lake Tanganyika, particularly in the Congolese side.