What Factors Limit Mountain Zebra Populations in Namibia and when is Intervention Necessary for Conservation Management?

Mountain zebras are sometimes culled without sufficient understanding of the natural processes that limit populations. This project aims to define these processes in a way that can help inform decisions about when intervention is necessary and when it is not, for example when populations are self-limiting. The main natural limiting factors are predation and rainfall (which determines grassland productivity). Five study sites have been established across Namibia in areas that vary in levels of rainfall and the occurrence of key predators. All have individually known mountain zebra populations which have been monitored for a number of years and can be used to compare key population processes, including birth and death rates, in relation to potential limiting factors. A better understanding of the operation of these factors will give improved tools to managers to help ensure the conservation of this vulnerable species. 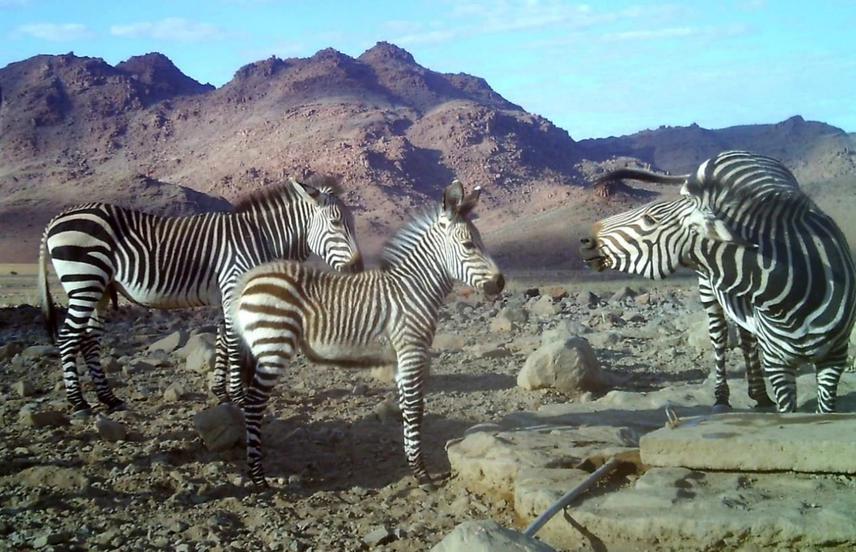 This project aims to explore the natural limiting factors of Hartmann’s mountain zebra (HMZ) populations in Namibia and to use an improved understanding of the impact of these factors to help inform decisions about their conservation management. These objectives will involve monitoring of population trends, the identification of key population processes, especially birth and death rates in age-structured populations, and analysis to show the effect of candidate limiting factors. Preliminary analysis of data from Gondwana Canyon Park and Ai-Ais NP have shown that rainfall variation in an arid area predicts both birth rate (in the absence of lions and hyenas) and overall mortality and this type of analysis will be developed and extended to comparative analysis between sites.

Monitoring will continue at five main study sites (Gondwana Canyon Park/Ai-Ais National Park, NamibRand National Reserve, Namib-Naukluft National Park, Etosha National Park, Hobatere Concession Area) using networks of camera traps and field observation. These sites have been selected because they vary in their levels of annual rainfall and in the occurrence of key predators (especially lions and spotted hyena). In addition to their use in the analysis of limiting factors, estimates of HMZ population size and other information about population viability will be passed to stakeholders to help inform conservation management practices.

The approach used in the study is individual-based, that is, recognizing, and following the life-histories of individual zebras, then combining records to obtain population numbers, time-series information and population processes. Individuals are recognised using coded variation in stripe patterns. All identifications are from photographs obtained from camera traps and conventional digital photography in the field and these photographs are also used to monitor body condition. Camera traps are placed at water holes because mountain zebra are water-dependent and such cameras can potentially sample entire populations. All of the study sites have individually-known population that have been followed for a number of years

Identification of the factors responsible for limiting populations in different parts of the country and in different protected areas will provide information about long-term conservation management options. For example, where populations are limited by low rainfall and patchy primary production, it might be important to prioritize free movement to ephemeral grazing in very large units of conservation. And, if predators are identified as limiting factors this may provide the information needed by conservation managers to consider the re-introduction of particular species where they have been previously extirpated.