In Ghana, sporadic studies, although hampered by technical and logistic difficulties, have revealed that the country’s waters are home to several cetacean species. Poor knowledge on cetacean population trends in this unique upwelling region, and high demand for cetacean products for human consumption may lead to a potential decline, that may go unnoticed. It is therefore required to quickly improve and implement viable data driven conservation measures directed to effectively address these unmanaged threats. The project aims at gathering new information on the poorly monitored cetacean populations to understand threats posed by interactions with fisheries and offshore operations. 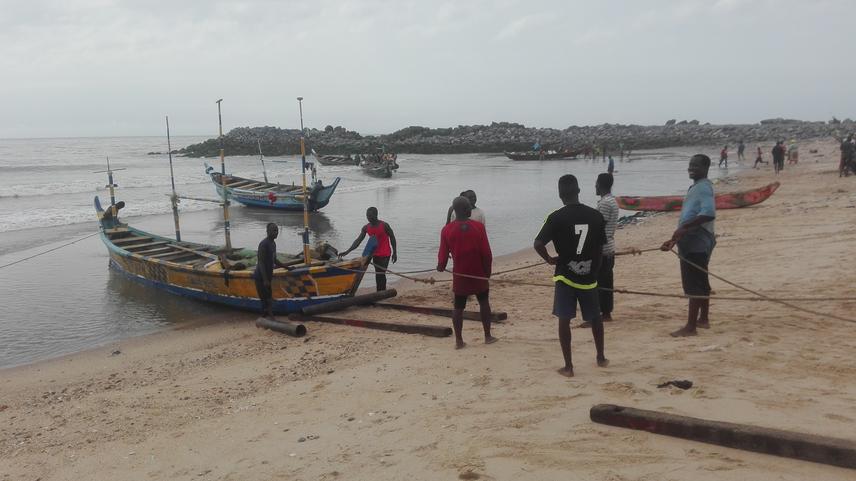 Project team member interactin with fishermen at Jamestown while helping them pull their net.

Although the cetaceans of the Gulf of Guinea and Ghana remain poorly studied, periodical monitoring reveals that these seawaters support diverse cetacean species. Six (6) baleen whale species and twenty-two (22) toothed whale and dolphin species most likely occur in the region. Three of these whale species are endangered (blue and fin whales), two are vulnerable (i.e. humpback and sperm whales) and several others are in lower-risk categories. (Van Waerebeek and Ofori-Danson, 1999; Van Waerebeek et al., 2009). Studies on cetacean species began in the early 1990s and a familiar trend in reduction of population sampled and the number of deaths recorded indicates a clear threat on the marine mammals offshore the Ghanaian coast. Records of earlier threats observed to marine mammals were attributed to drift grill net fishing. Artisanal fishermen were intentionally capturing smaller dolphin species with sharks and tuna while bottlenose dolphins are also known to be taken in semi-industrial purse-seines fishing at the more prominent fishing harbour in Accra, Jamestown. (Van Waerebeek and Ofori-Danson, 1999). With the increase in coastal development at the onset of offshore oil discovery, the coast of Ghana is experiencing an upsurge in the deaths of cetaceans. Between 1999 and 2009, over one hundred (100) dead whales were recorded to wash ashore the coast of Ghana, most of which are sperm whales. (Ofori-Danson et al., 2003; Debrah et al., 2010). Many environmental groups have attributed these deaths to offshore collision with vessels, but oil drilling companies have debunked these claims. Seismic sound from oil drilling and vessel propellers are known to cause behavioural changes in cetaceans due to their known reliance on sound for activities such as communication and navigation.

The poor knowledge on population trends of cetaceans in this unique upwelling region, together with a high demand for cetacean products for human consumption (as “marine bushmeat”) may lead to a potential decline of some species that may go unnoticed. It is therefore needed to quickly improve and implement viable data driven conservation measures directed to address these threats. The project aims at gathering new information on the poorly monitored cetacean populations to understand threats posed by interactions with fisheries and offshore operations and this will be done with locals through a participatory and interactive approach using available mobile phone technology.