Distribution, Ecology and Habitat Use of the Himalayan Gray Langur, Semnopithecus ajax in Jammu and Kashmir, India

Himalayan gray langur Semnopithecus ajax is little-known endangered primate, endemic to Himalayas. Its distribution and population status are poorly known. In Kashmir and adjoining regions, it is likely at risk of extinction due to land use change and conflict with humans. In this project, I will ascertain the current distribution, and identify sites that face human-langur conflict. I will also attempt to determine the effects of human-induced habitat changes on feeding ecology of langurs. 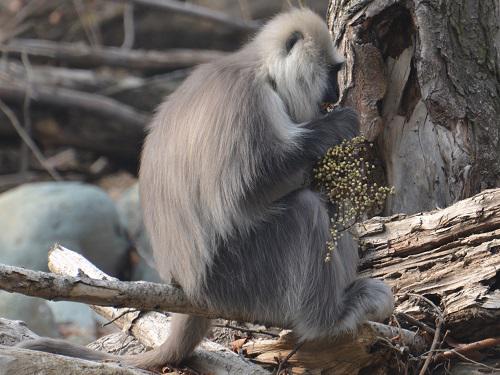 Nearly half of world’s 634 primate species are threatened with extinction. Extinction threats are often due to habitat loss and degradation, and hunting. Himalayan gray langur, Semnopithecus ajax is an endangered high altitude primate facing such threats due to conflict with local communities, and landuse change. This primate was formerly considered a subspecies of Semnopithecus entellus. However, recent studies confirmed its status as a species, Semnopithecus ajax. Due to pre-existing confusion in taxonomy, its current distribution, habitat use, feeding ecology, and conservation status are poorly known. It is likely facing a large number of threats, such as: 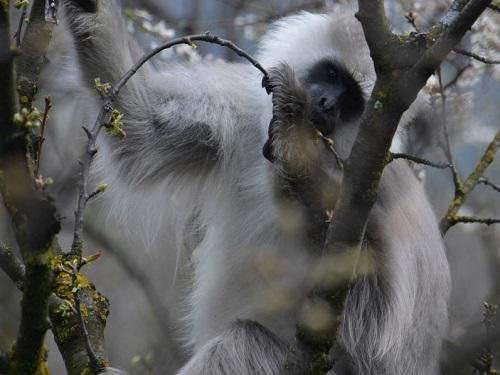 Langur feeding on flowers and buds. 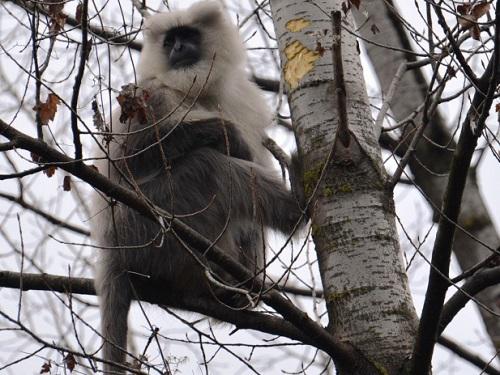 They are leaf-eating langurs endemic to Jammu and Kashmir and Himachal regions of western Himalayas, where the ecosystem is vulnerable and susceptible to the impact of anthropogenic pressure. Other concerns are its restricted range and fragmented populations. Information on its distribution, habitat use, feeding ecology, and levels of conflict with humans is inadequate. This impedes effective evaluation of its conservation requirements.

This project will establish baseline information on distribution, habitat use, and feeding ecology of S. ajax across different land use in Kashmir region of the Himalayas. The project aims to focus on the effect of human caused disturbance on their feeding ecology and identify the reasons of conflict which is documented during my preliminary surveys. One of the hypothesised reasons for human-langur conflict in this region is expansion of fruit orchards and vegetable farms close to the protected areas. These plantations attract langurs in large numbers. They cause damage to the plantations by destroying fruits and de-barking the trees, and trigger retaliation from farmers. This study will identify the nature and severity of such conflict and explore measures to reduce such conflict with participation of local farmers.

1. Assessing the status, mapping the distribution and identifying the conflict faced by the Himalayan gray langur in the Jammu and Kashmir region

2. Study and comparison of habitat use, feeding habits and behaviour of the Himalayan gray langur among sites with different levels of human disturbance

Collectively, I hope my efforts will help develop a constituency for conservation needs of the langur, as well as adequate attention to conflicts arising from them. I anticipate that this project will offer the necessary data to initiate a balanced assessment of threats faced by langurs, as well as conflicts created by them.