Pangolins in Peril: A Perspective of their Use as Traditional Medicine and Bushmeat in Ghana 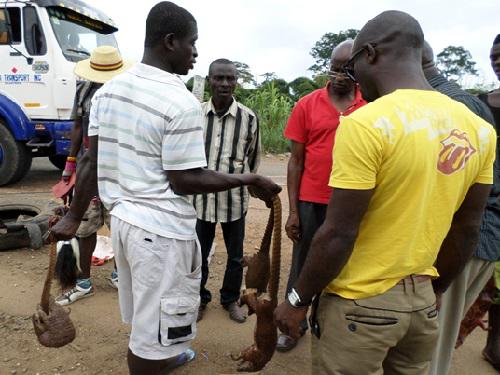 Sale of pangolin along a major highway in Ghana.

The practice of healing human diseases by making use of wild animals forms part of the local African culture and tradition. Pangolins are one of the most consistently used species in traditional medicine and bushmeat consumption throughout Africa. The widespread traditional use of the the Black-bellied Tree Pangolin (Phataginus tetradactyla), the White-bellied Tree Pangolin (Phataginus tricuspis) and the Giant Ground Pangolin (Smutsia gigantea) is expected to have severe conservation implications on their population status. All extant species of pangolin are considered threatened and are listed in Appendix II of CITES. Currently, there is an increased demand for African pangolin species from Asia as the four Asian species numbers have collapsed due to smuggling and poaching primarily for the upper Asian market as a meat delicacy. It is imperative that we have more information on the local traditional use of these three species and how to manage these dwindling populations more effectively. However, the availability (population status and density) and demand for the three West African pangolins is not known and needs to be quantified to develop a risk assessment and initiate a conservation management strategy.With no current conservation management plans in place for these species, it will be difficult to develop a conservation strategy if off-take has not been quantified.

This study is the first attempt at quantifying the use pangolins for traditional medicine and as a source of bushmeat across varying tribal, cultural and economic indicators in Ghana and it will provide valuable conservation information with regards the exploitation of these three pangolin species. Expected outcomes will be to establish educational and awareness-raising campaigns created among local traditional healers and bushmeat operators on the sustainable use of pangolins and to enlighten the conservation authorities on the current use of the species.