Distribution and Conservation Status of the Black-Footed Cat Felis nigripes

The project aims to improve the data on distribution of black-footed cats in Namibia by collecting distribution (current and historical) records. In order to better protect free-ranging black-footed cats and their habitat, the project will raise awareness and educate through media coverage, farm surveys and talks with farmers. By collaborating and sharing information with the Black-footed Cat Working Group will facilitate data on the species’ regional distribution; ecology; habitat use and potential threats. 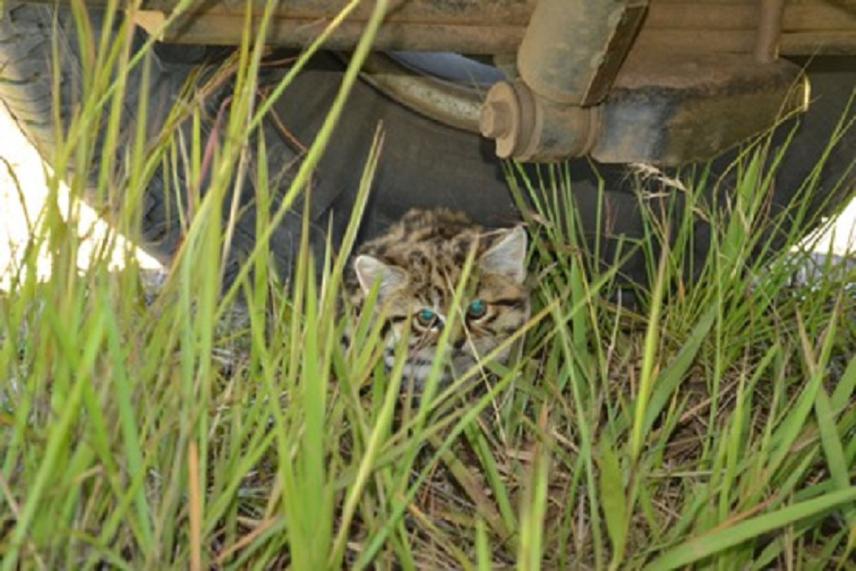 Some records are of juvenile black-footed cats when they start wandering further from the den (BFCWG).

The black-footed cat (Felis nigripes) has the most restricted distribution of all wild cat species in Africa. Possibly, specific habitat requirements and ecological and environmental factors keep its distribution patchy and population densities low. Threats such as unintentional moralities during predator control, habitat loss and degradation may affect the species’ persistence throughout its predicted range. The bfc is the rarest of the African felids and only one study has been done on its biology, behaviour and ecology (Sliwa, 2004, 2006). The IUCN recommends further distributional studies in Namibia and more ecological studies in drier habitat more typical of the species predicted range (Sliwa, 2008). Limited information of the species’ distribution and confirmed records exist in Namibia and its conservation status is not unknown throughout its range. Density estimates of a free-ranging population in South Africa are 0.17 cats/km² (Sliwa, 2004) and it is expected that densities may be much lower in drier areas with lower quality habitat.

The black-footed cat is rarely seen and reported, difficult to survey or detect its presence, probably occurs in very low densities (especially in drier regions) and is may be under-reported or could be more common than expected. Therefore, the project is building and using the data gathered through the first RSG to survey areas for sightings to get an estimate of density. Four potential study areas (collectively 8 farms in 4 separate areas of southern Namibia) with confirmed records of black-footed cats have been identified. Intensive surveys of the farms will be conducted by spotlight searching to estimate black-footed density and preferred areas of occurrence. The search will be extended to include neighbouring farms, thereby collecting records on a more fine-scale in a specific area. The aim is to secure an area with a viable population of cats, suitable habitat and accessible terrain. Awareness and education have resulted in farm owners reporting and sharing information on specific sightings, tolerance and possible conservation threats. Landowner cooperation and participation have been very positive and are important for the local and regional conservation of the bfc. A partnership has been established with the Black-footed Cat Working Group. As a result, I have the opportunity to monitor radio-collared bfcs in South Africa; gain experience and knowledge to further develop the project in Namibia. Furthermore, collaborations with the local conservation authorities will assist and promote the species’ protection status.