Distribution and Conservation Status of the Black-Footed Cat Felis nigripes

The three aims of the project are:

(2) Educate and raise awareness for this small wild cat and

(3) Find strong-holds for the conservation of the Black-footed cat Felis nigripes in Namibia. 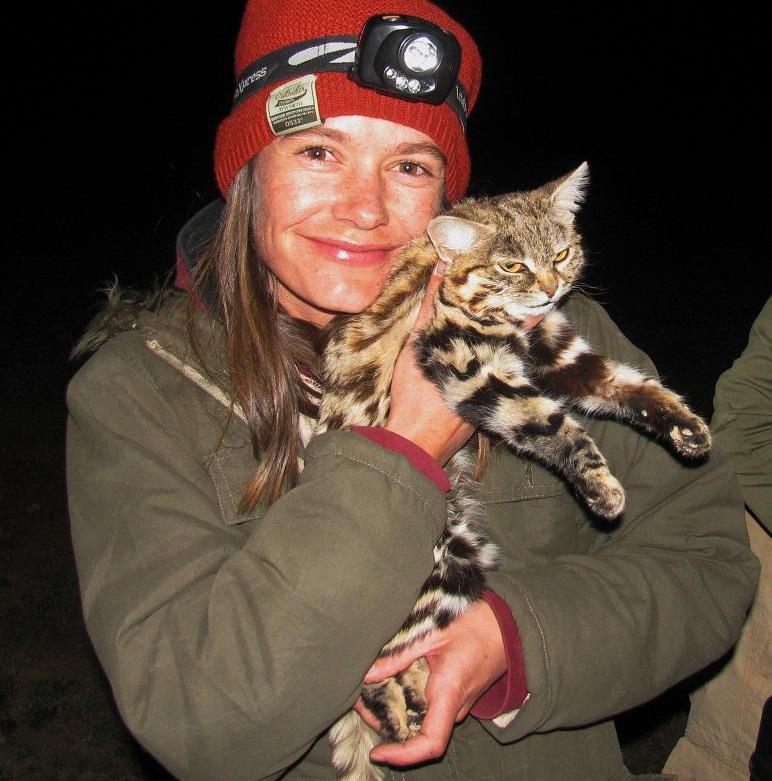 Me with one of the captured black-footed cats on the BFCWG field trip November 2013. © S. Silinski.

The Black-footed cat Felis nigripes, is the rarest and smallest African feline, endemic to southern Africa, primarily found in South Africa and Namibia, but also Botswana and possibly in southern Angola (Sliwa 2008, Smithers 1971). Although its predicted range extends large parts of central and southern Namibia, few locality records are documented. Namibia has extensive commercial and subsistence farming land in the south of the country, where as the predicted range and habitat preference suggests, the black-footed cat may occur more frequently than in the central or northern parts of the country.

This study aims at collecting more fine-scale distributional data through questionnaire surveys, assembling locality records throughout Namibia (e.g. camera trap data, observation records from private and national parks, museum records etc.), raising awareness for the species through awareness posters printed in English and Afrikaans (local language) and general environmental education (e.g. attending farmer's meetings, visiting rural schools, radio live reads and interviews etc.), investigating conservation threats of the species in Namibia and to identify suitable study areas or strong holds for future ecological studies. The project aims to target the farming community, especially in the southern parts throughout Namibia and attempt to determine perception/ attitudes and degree of tolerance towards the cat. Attitudes will be defined as tolerance towards the species, the level of perceived threat to livestock or other by the species and to what extent the farmer or land owner will go to eliminate the threat (i.e. opportunistic persecution of the cat or active baiting and trapping). Conservation threats may be linked directly to attitudes perception of the species.

One of the challenges of the project will be to distinguish records of the Black-footed cat from the similar African wild cat Felis libyca. Interview questionnaires will clearly indicate identifying characteristics and features of the two species with good pictures for comparison that will aid in distinguishing between the species.

This project aims at improving our knowledge on the distribution and ecology of the Black-footed cat through involving the public and farming community. The species in not legally protected in Namibia and should be promoted as a flagship species for the biodiversity and for the ecological conservation of arid environment of southern Namibia.